Works on paper: 71 artists all on the same page

Debra D. Johnson April 20, 2022 Photographic paper Comments Off on Works on paper: 71 artists all on the same page 5 Views

RISE AND SHINE: Near the main entrance is Sloat Shaw’s unique lithograph and monotype, “Dawn Reaching Up to Start the Day”. In a conversation with Whitlock, Shaw said making art is about creating language and using an artistic voice. (Illustration by Sloat Shaw, courtesy LBIF)

The 24th Annual National Juried Competition: Works on Paper, open through May 30 at the Long Beach Island Arts and Sciences Foundation in Loveladies, is a playground for the imagination, filled with lavish shapes and textures , abstract and figurative.

Drawings and paintings on paper, hand-drawn prints, collages, photographs, digital works and paper constructions are thin slices of human experience. Most are behind glass; some are unframed, exposed, emphasizing the fragility of the substrate. Paper, like people, is temporary. The printed catalog of the complete exhibition will be available on April 25.

Seventy-one works by 71 artists were selected from more than a thousand submissions from across the United States. 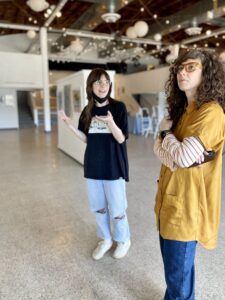 Juror Esther Adler is curator in the Department of Prints and Drawings at the Museum of Modern Art. Works on Paper is supported by the New Jersey State Council on the Arts and Bank of America.

Of the juried process for the Works on Paper exhibition, Adler said, “I found myself looking for beauty in these submissions, not just aesthetically, but rather in the shared commitment to creating art as way for artists to understand and shape the world. I was not deceived.

LBIF welcomes Adler to the Main Gallery on May 14 to present a lecture on his traveling exhibit “Joseph E. Yoakum: What I’ve Seen” (now in Texas) as it relates to drawing and the natural world. An artists’ reception and awards ceremony will follow. The free event, open to the public, starts at 5 p.m.

Gallery directors Kate Whitlock and Jeff Ruemeli, along with gallery coordinator Amber Manoski, arranged and hung the artwork. Their goal was to balance visual weight and flow, allowing the pieces to communicate with each other, Ruemeli said. The show seemed to flow effortlessly, Whitlock added. 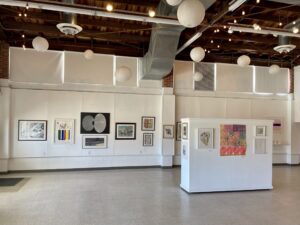 The joy of discovery when opening the boxes containing the art, Whitlock said, is akin to Christmas morning. She grabbed a gallery wall – “I had a grouping in mind,” she says – and placed them in a way that spoke to her.

Hanging the art, she finds herself.

Lending the show together with works that are luminous, full of movement, playful and meticulous, reflected Whitlock. Common points are concentric circles, color fields, nature, themes of imperfection, humility.

Manoski noted the interplay of organic and geometric shapes.

Indeed, the variety of imagery is vegetal, animal and mineral. Natural and industrial. Some are fleshy, suggesting muscle or hair. Some transmit the science of images and sounds.

Ruemeli sees ripples in a lake, signs of an upcoming storm, but also radio and sound waves, static/distorted and planetary phases. Illustrating his point and anchoring the exhibition on the back wall, a giant diptych by Chris Chandler entitled “Fade Out/Black”.

The word “portal” comes up more than once. 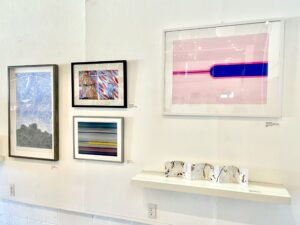 Whitlock said Adler told her, “During this time of uncertainty, she’s been encouraged by the positivity of this show, and when you walk around, you feel it.” Ruemeli described the exhibition as all about lines, whether guiding an eye through an image or guiding a viewer through the gallery.

Welcoming visitors near the main entrance is Sloat Shaw’s Unique s2400tone lithograph and monoprint, “Dawn Reaching Up to Start the Day”. In a conversation with Whitlock, Shaw said making art is about creating language and using an artistic voice.

If the jury’s choices collectively make a statement, the individual works are the punctuation.

Process-oriented, rich in technique and inviting a closer look at detail, each has something to teach the viewer about how paper can be used, Whitlock explained. 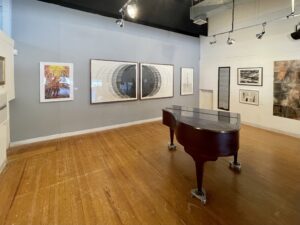 Here, a screen print plays with the eyes. There, risograph prints and handmade paper defy assumptions. Jacquelyn Strycker’s “Fringe” is almost quilt-like, pushing boundaries while invoking the past.

In Amber Palecek’s ink and watercolor “Root Bound”, notice how each blade of grass and each leaf is demarcated. Imagine the time invested, the artistic choices. Several works raise the question “When is it over?”

Surprises await you around every corner.

A few artists from New Jersey serve on national juries. “Reclaiming Honor, Respect and Devotion to Duty” by Hillsborough artist Mark Oldland is a Coast Guard vessel depicted in mixed media on paper. “New Moon, Black Moon” by Sicklerville artist Dominic Martelli is watercolor, gouache, pen and graphite powder – one of the only ones in the NFS – Not For Sale exhibit. Susan Hennelly of High Bar Harbor offers her bold and evocative watercolour, “The Cave”.

Joyce Jewell describes her four-color woodblock print, “In the Hall”: “During the pandemic, I found myself drawn to the simplicity of woodblock printing. Photographing the interiors of my home and exploring shadows and shapes led to a series of multi-layered woodcuts. The satisfaction of the process allowed me to combine and interact with the images in ways that celebrated our simultaneous existence. 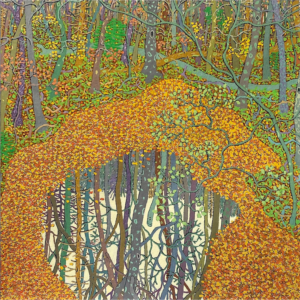 Gregory Hennen says of “November Pond, Wyatt, MT,” his gouache depiction of trees, fallen leaves, and foliage reflected in a pond: up close, and even venturing into, the natural scene depicted. The finished paintings are often composites of several images that have evolved from a realistic representation to a more simplistic interpretation.