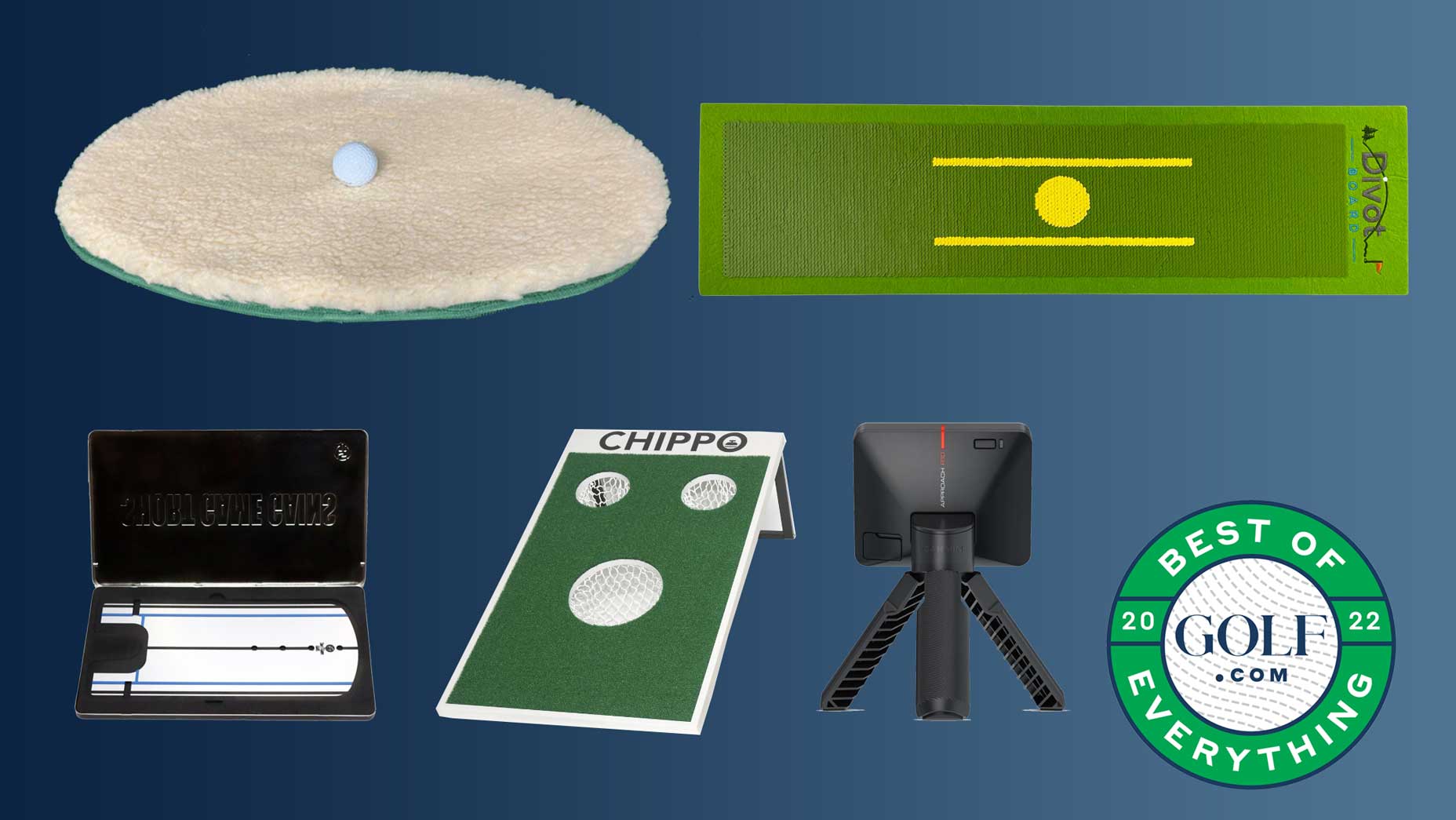 Pen tablets and controllers for editing and retouching certainly help photographers, especially when working on large batches of images. These editing tools from Xencelabs seem to take that to a whole new level.

The tools used for editing, retouching, designing and creating graphics are generally made universal. However, creating a tool that can be used by more people often limits how it can be made more effective for specific workflows. Most pen tablets are made with a few buttons and a stylus, and those should work well enough for use by graphic designers, photographers, retouchers, and everything in between. Similar to what happens with photo hardware, the most useful tools are those that you can customize to make your workflow more efficient and, at the same time, make working with the tool more efficient. This is why most of the digital tools released in recent years not only offer better performance, but also aim to allow maximum customization. The Xencelabs pen tablet and the Quick Keys combo are outstanding examples of such tools.

The Xencelabs tablet is available in three sizes: small, medium and large, depending on your personal preferences. The small tablet takes up 9.21 x 7.27 inches of space on your workspace and is 0.3 inches wide. Inside that, the active area is 6.93 x 3.89 inches which is marked by a customizable LED indicator on all four corners. On the top edge are a USB-C port and a power switch. In the middle of the top of the tablet surface are three customizable buttons, and the bottom edge tapers gradually to give a better resting surface for the user’s wrist. It contains a built-in battery that can last up to 16 hours and fully recharge in 2.5 hours.

The Xencelabs Quick Keys Remote is a 6.2 x 2.48 inch pocket tool with a width of 0.47 inches and weighs just 142 grams. At one end is a dial with a diameter of 1.41 inches and a central switch button inside that occupies 0.6 inches. At the other end is a single settings button for changing modes in a designated editing application. Occupying the center half of the surface is a 3.18 x 1.0-inch OLED display accompanied by four customizable buttons on either side. On one side is a single USB-C port for charging and connectivity, while on the other side is a power switch. 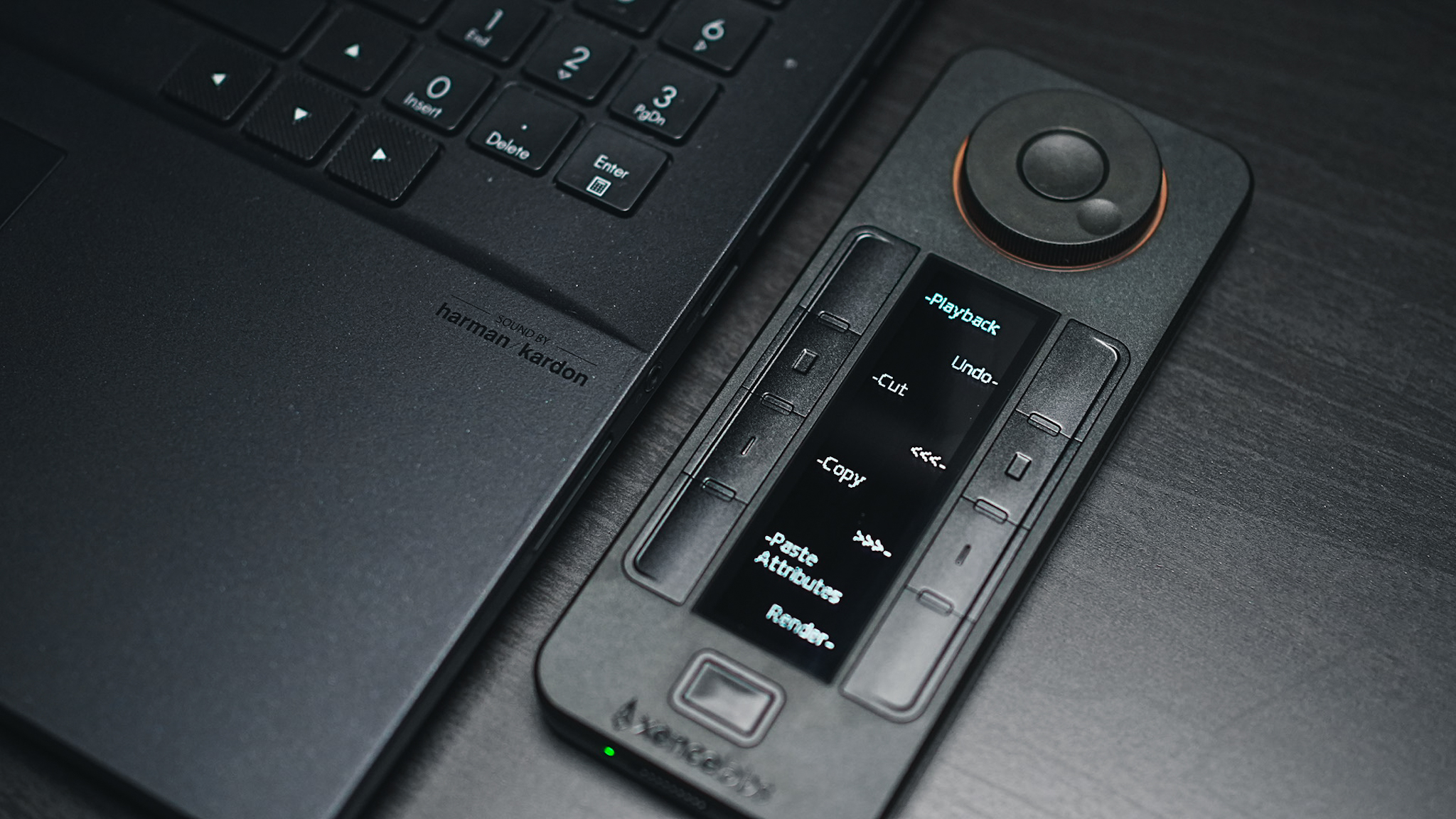 Along with the tablet, the box includes a soft padded carrying case, USB-C to USB-A cable, half glove, and tool case with a hard silicone mold to hold its contents securely. The case contains two pens, six extra plastic nibs, four felt nibs, plus a USB-A dongle, USB-A to USB-C adapter, and nib removal and replacement tool. One of the pens is thinner with a 0.37 inch diameter, two custom buttons, a pen nib on one end and an eraser nib on the other. The second is a thicker pen that measures 0.55 inches at the largest diameter and tapers down for better feel. This second stylus features 3 customizable buttons as well as the same dual-ended configuration for a stylus tip and an eraser tip. All in all, it is quite impressive to see that users have a choice of two pens as well as secure and efficient carrying cases for better portability. 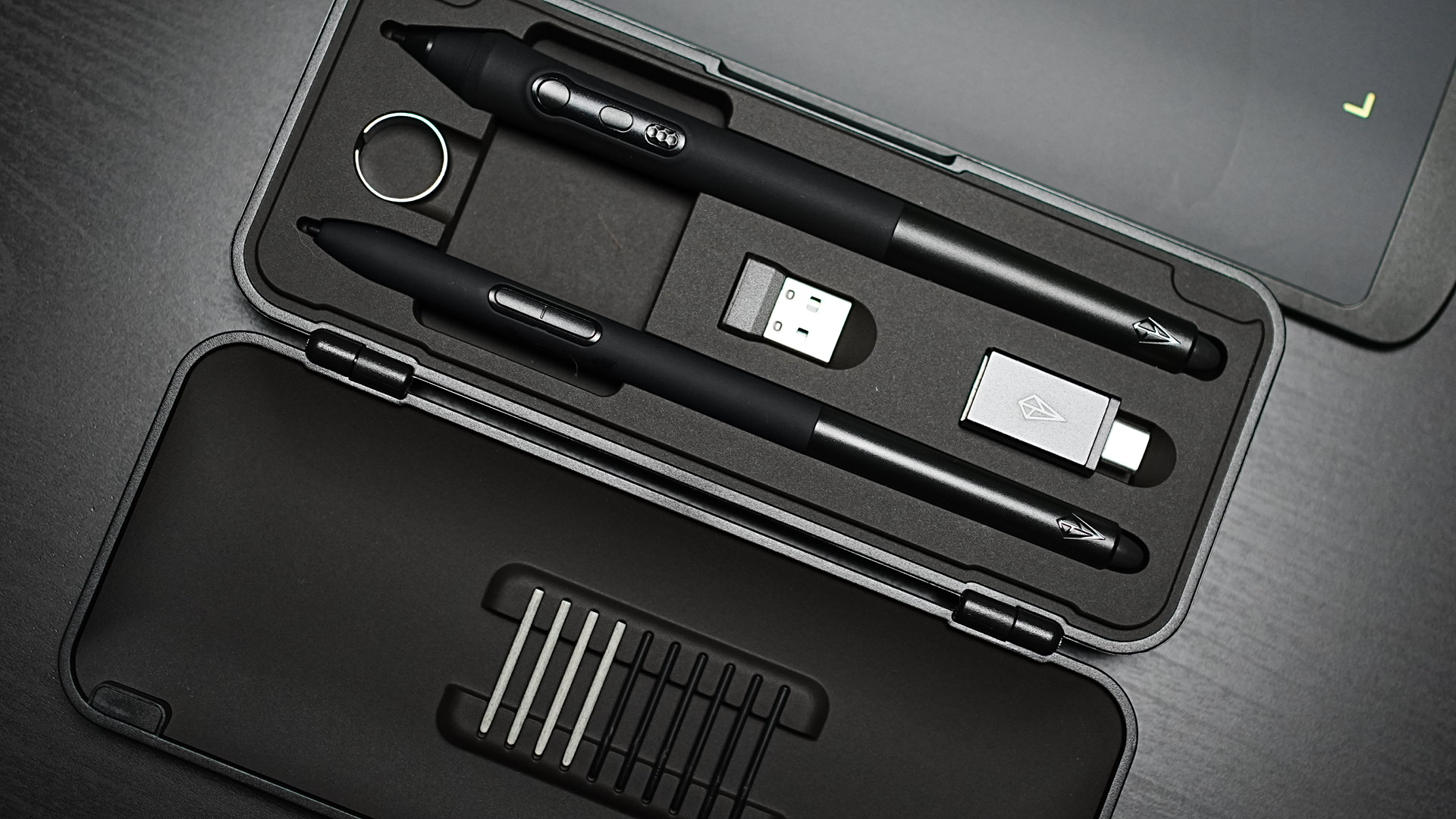 Quick Keys come with their own hard-shell carrying case, USB-A dongle, USB adapter, and USB-C to USB-A cable. The case has room for all of these accessories and a few extras. 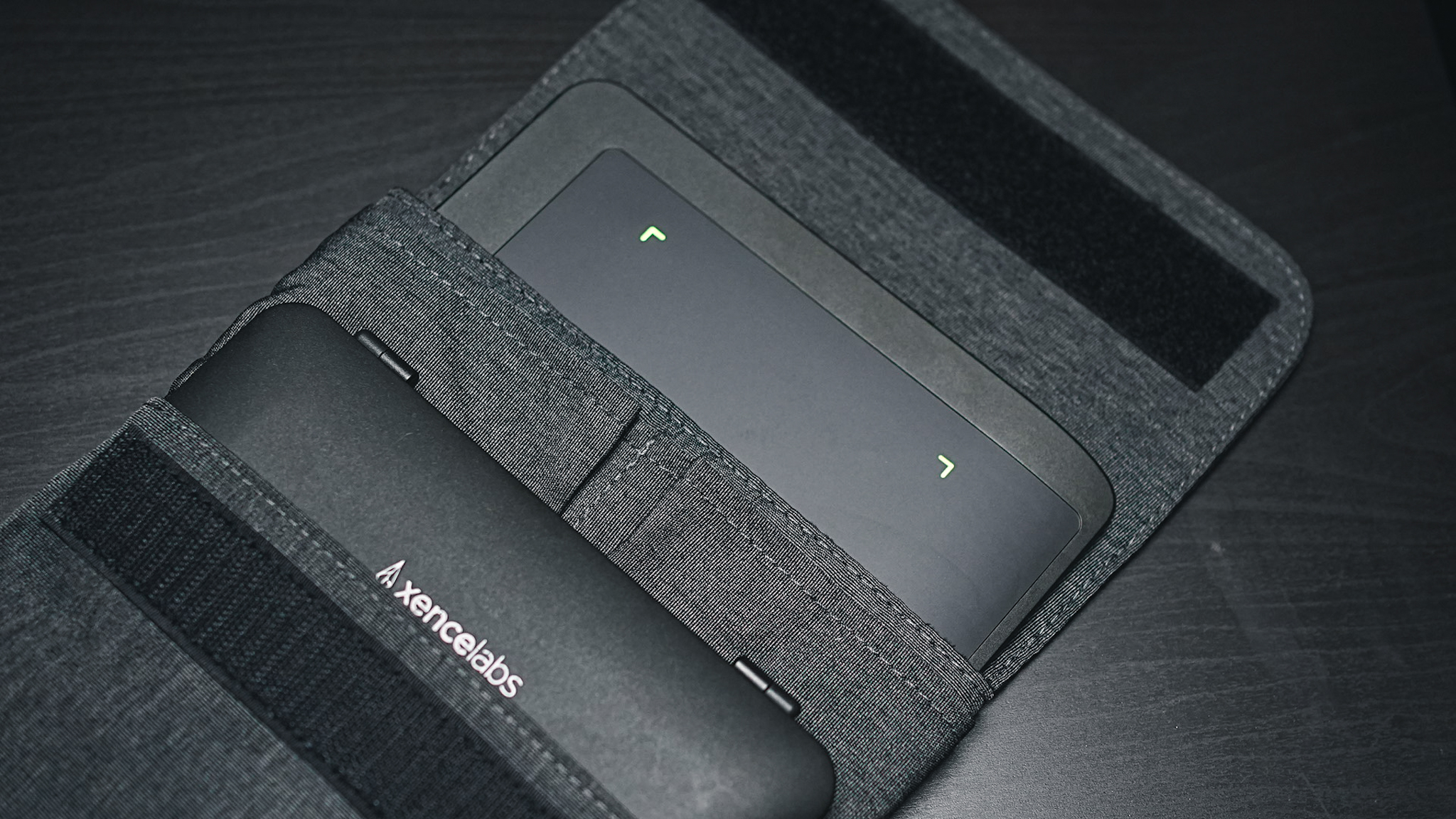 Packaging is perhaps another important aspect of these tools. The tablet and Quick Keys have virtually no plastic in their packaging except for the wrapper that protects the entire cardboard packaging when new. Sustainability and preventing the production of plastic waste are steps many brands have taken recently, and it’s impressive that this relatively new brand seems to be headed in that direction as well. 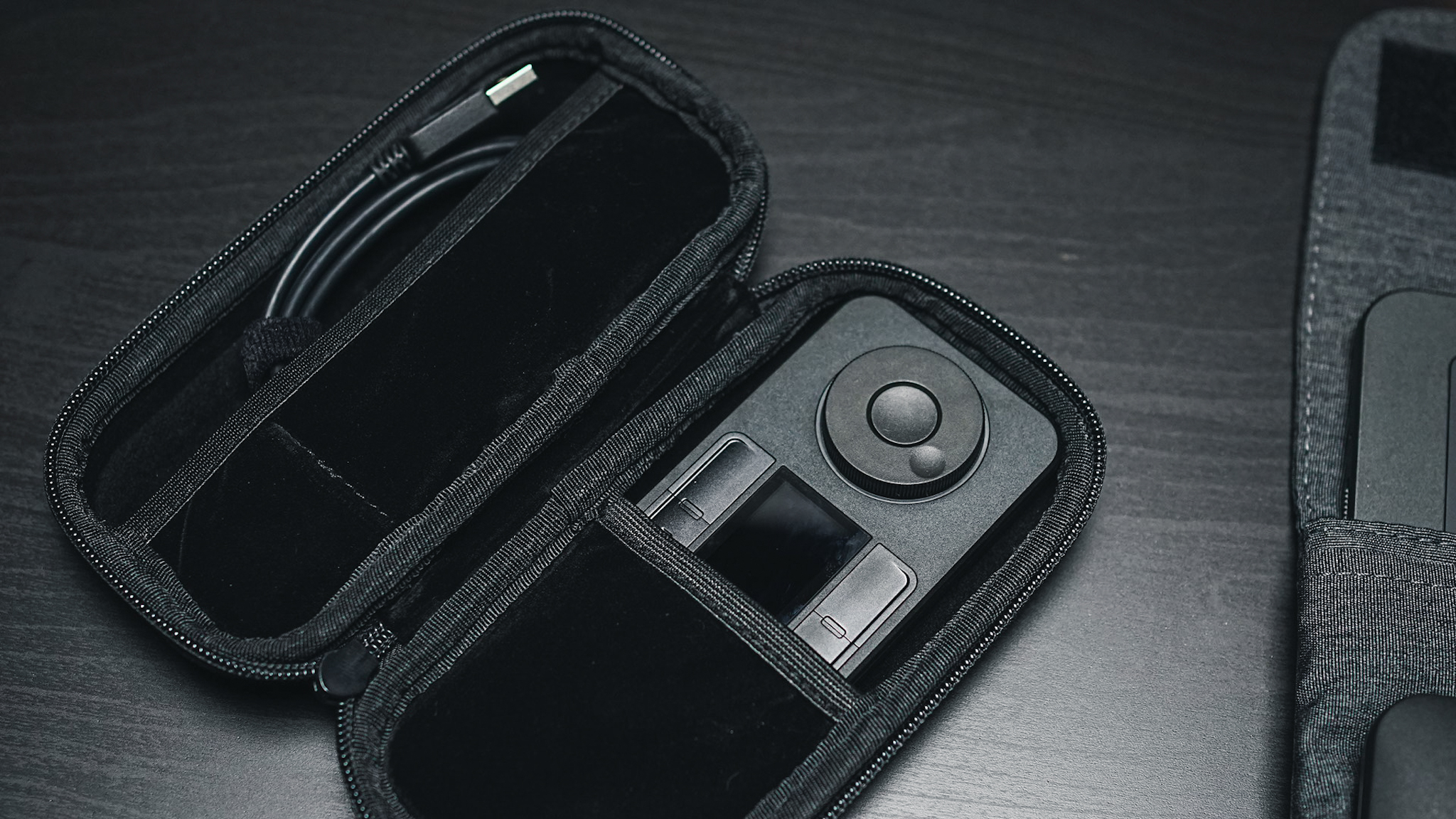 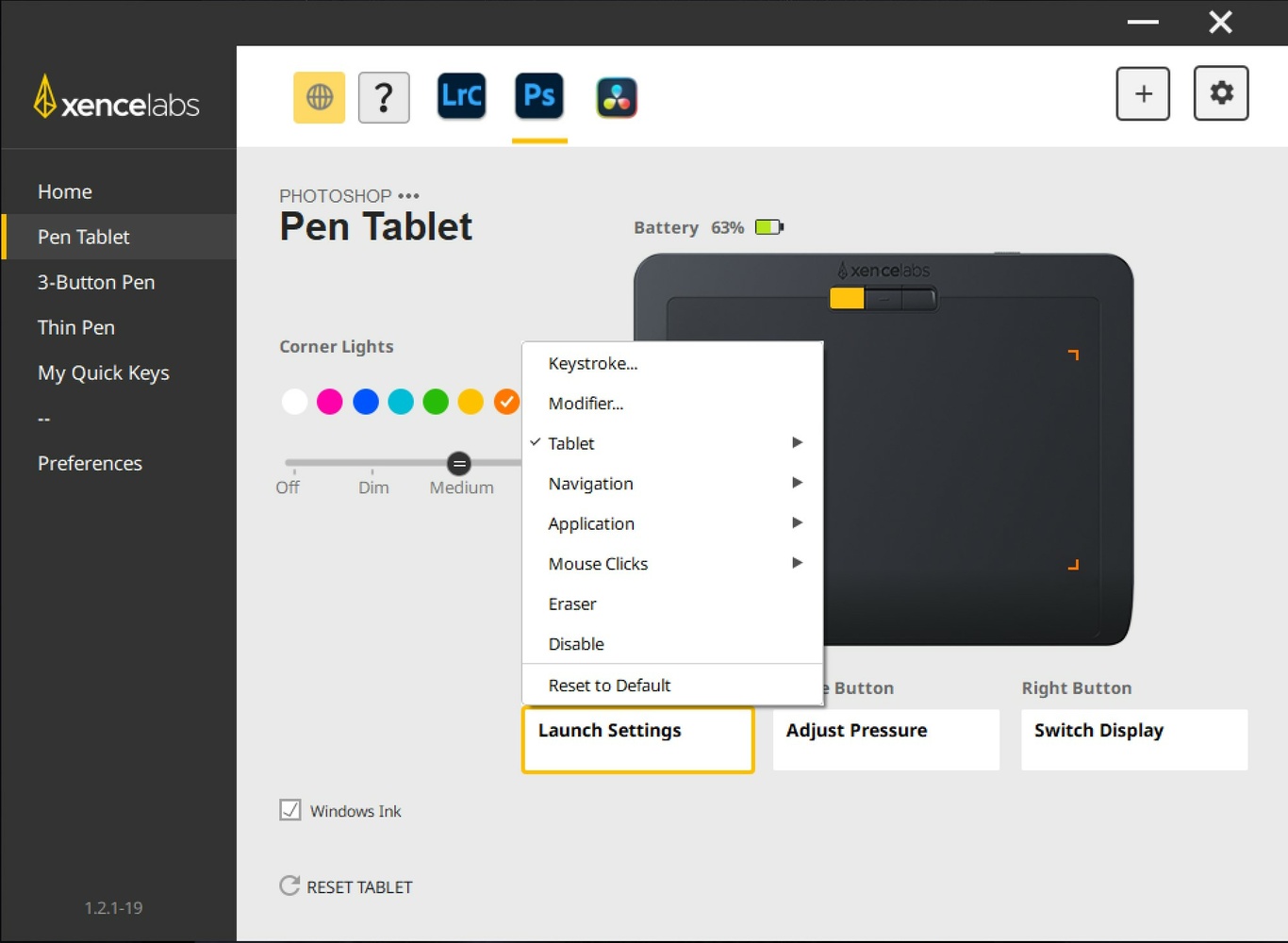 Setting up both devices is simple and straightforward. The first step is to simply download the driver available from their website and plug it in via the cable. This step also configures the product for wireless connectivity using the dongle, which means that once the cable is removed and the dongle is plugged into the USB port, the device automatically pairs and connects to the computer . 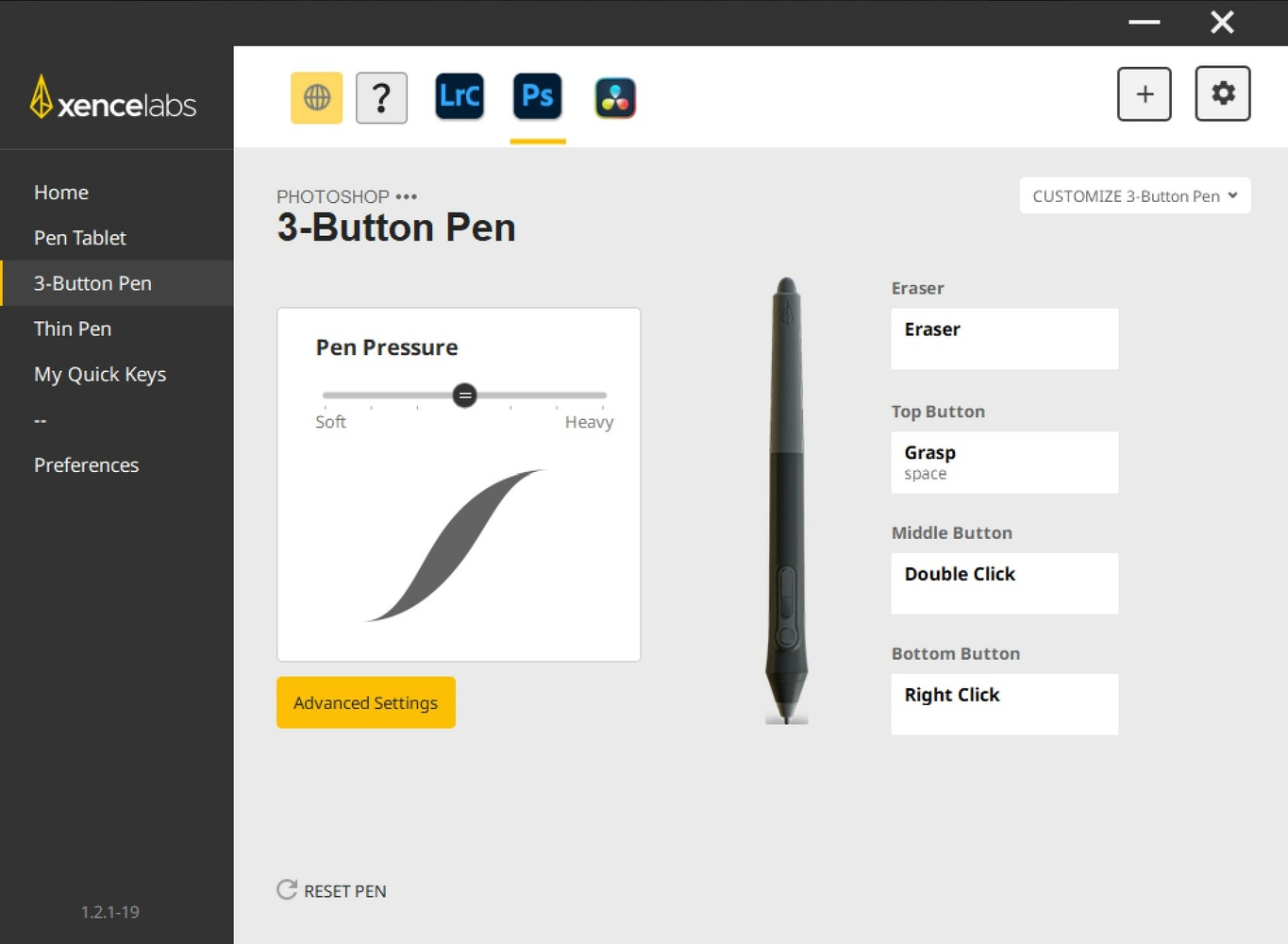 The tablet configuration allows you to customize the three buttons on the top of the tablet as well as the pen buttons. These buttons can be designated for combinations of keyboard shortcuts, mouse buttons, navigation tools, as well as shortcuts to various applications. The same configuration steps apply to hotkeys. However, this obviously implies more buttons which can be customized for the same functionality. Shortcuts for a specific application can be customized into sets that can be designated for specific workflows, such as sketching, editing, or drawing. Each app can have up to five sets and each set has eight different shortcuts providing up to 40 functions per app. Each function of each button can be labeled differently according to the user’s wishes and makes the label available anytime the device is turned on. The dial can also be customized to scroll, zoom, change layers and brush size by pressing the function button on the dial. The orientation of the device can also be rotated according to what the user prefers and the display text will be adjusted with it. 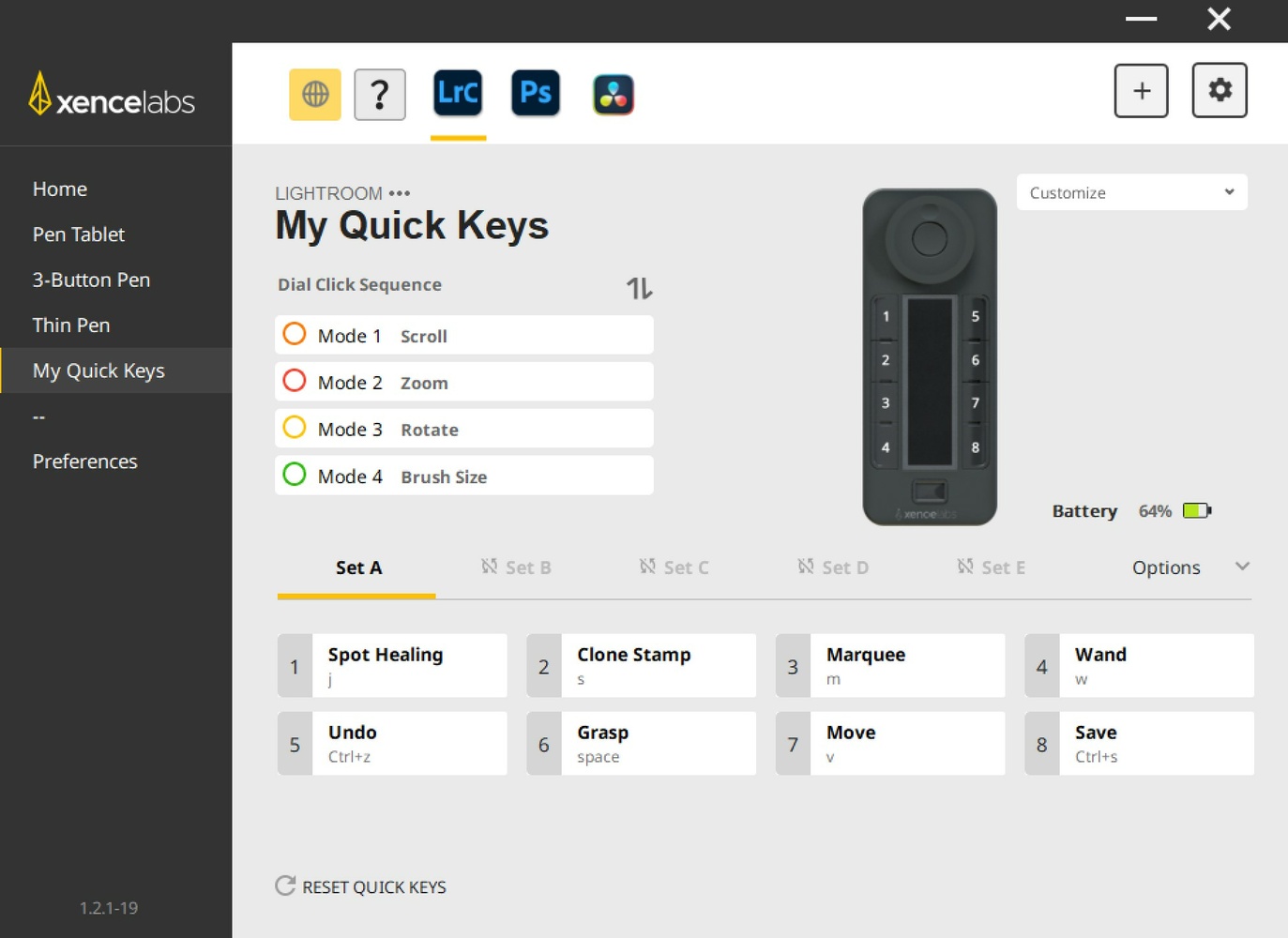 Like all other pen tablets, the Xencelabs pen tablet works as a more precise input tool instead of a mouse or trackpad. The pressure level sensitivity of 8,192 and the 60 degree tilt functionality are indeed impressive. Along with the three or two buttons available depending on which stylus you prefer to use, the functionality of the other end of the stylus as a customizable eraser tip is quite unique and impressive. Generally, the tablet is compatible with any application. However, the custom buttons of course depend on the shortcut functions available in the application used. 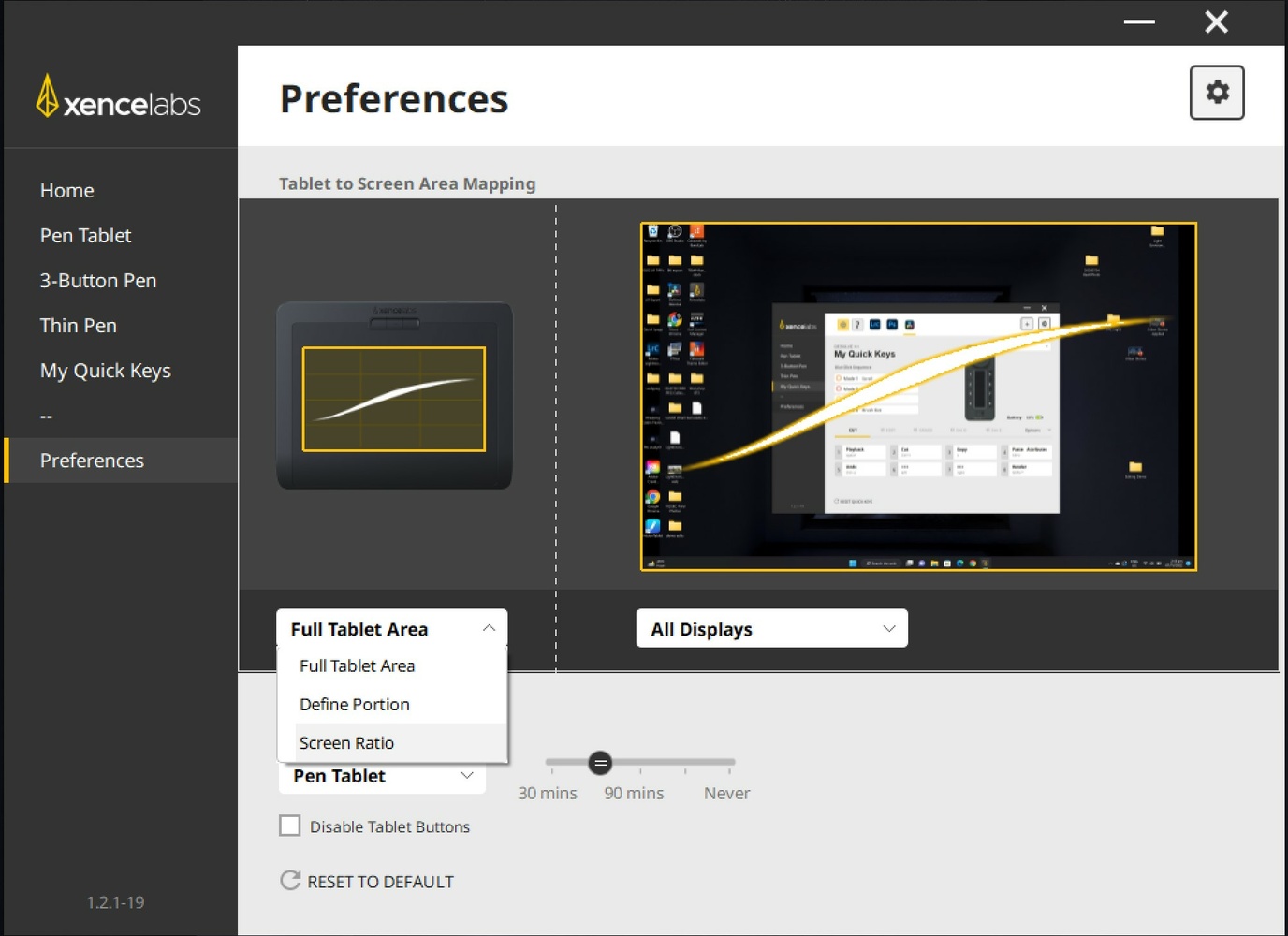 The hotkeys are the part of this combination that perhaps brings the modularity. Just like the tablet, the buttons are customizable for any app function or navigation tool as long as a shortcut is available in the app or on the PC’s main system. This makes the device not just a tool that photographers can use, but virtually anyone who needs handy shortcuts. 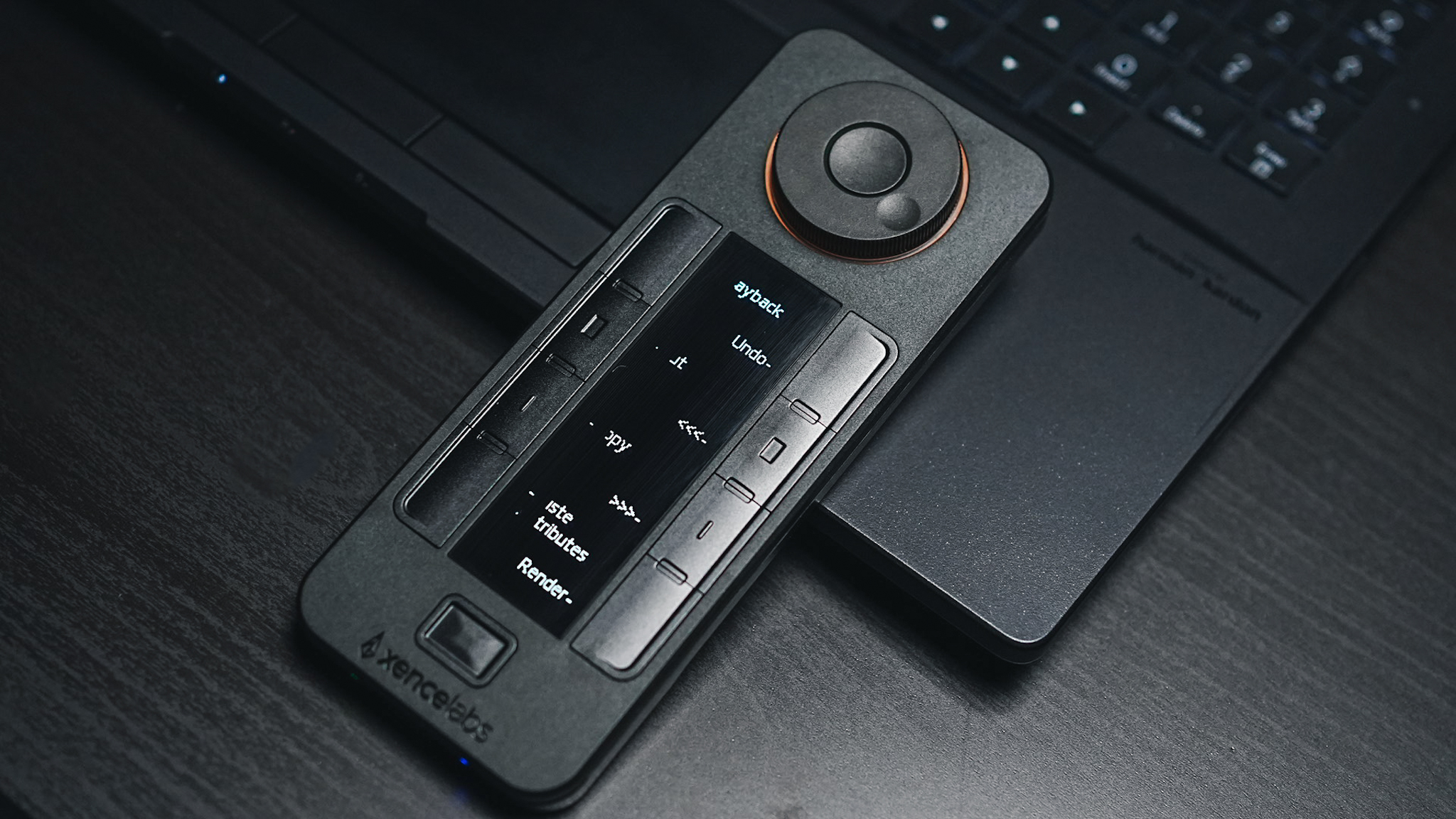 At first glance, I was personally intrigued whether this device could also serve as an editing console not only for photography-related applications but also for video editing and it’s a pleasure to see that all the necessary tools that I would prefer on my Adobe Premiere and Davinci Resolve shortcuts can be configured on the device. Personally I use a Tourbox Neo which was helpful for efficiency in editing videos but it took a while to memorize all the hotkeys I assigned and I ended up using only ‘about half of the buttons because I couldn’t immediately remember where I had put the functions I used less. The Quick Keys solved this problem due to the custom labels on the screen and have a more user-friendly construction since the dials and buttons protrude less and they come with a dedicated carrying case. 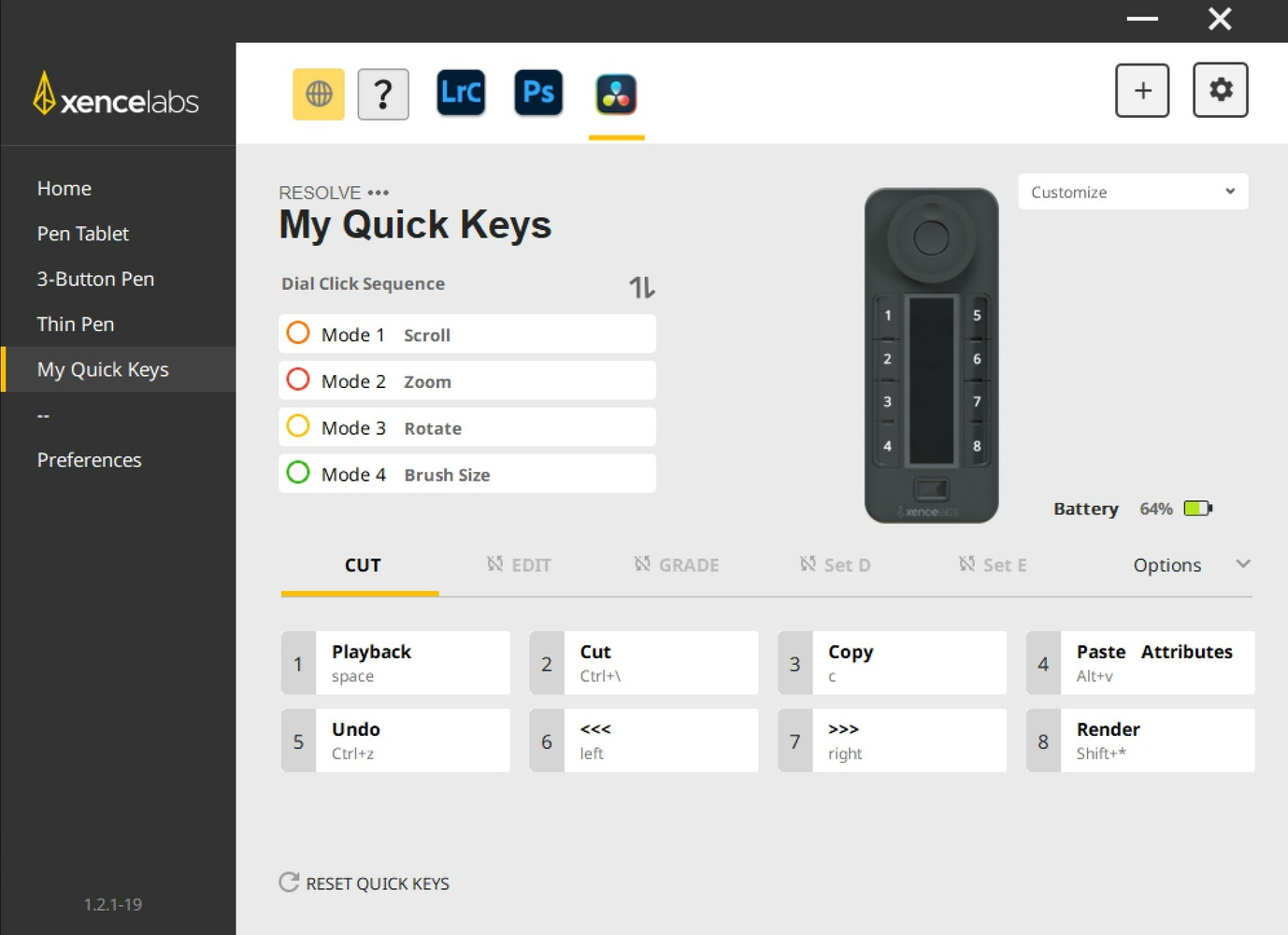 The Quick Keys tablet and controller can be used together or independently depending on user preference. Generally the functionality expands when the tablet is used in combination with the controller. The dongle can also be configured to work for both devices, although they would certainly be much more convenient if Bluetooth were an available option. 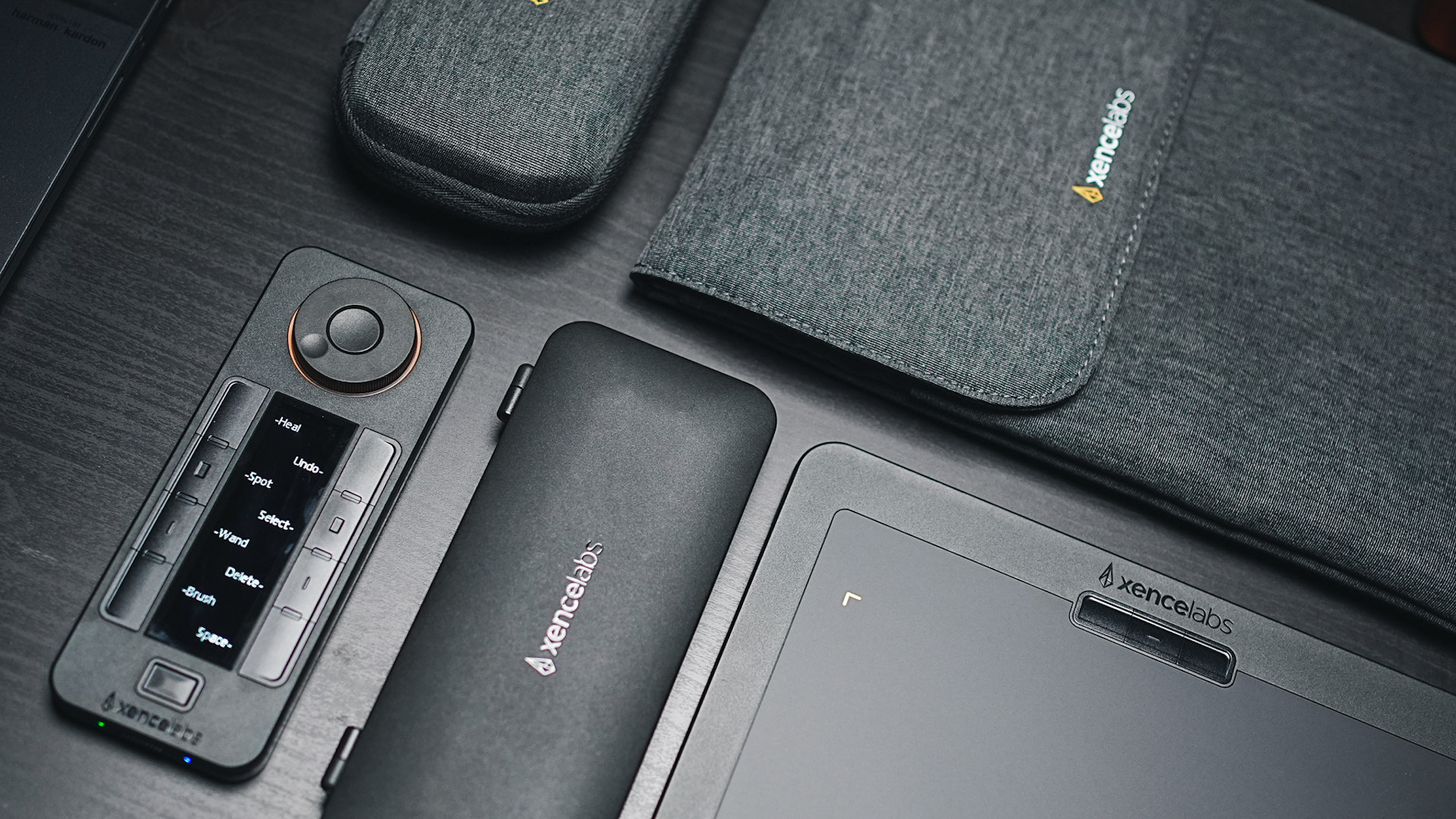 Overall the pen tablet offers convenience and a good range of options with the extra buttons and tips. The option between a thinner pen with fewer buttons and a more tactile pen with more buttons is a thoughtful bonus on top of the well-made carrying cases. As far as my personal use of these devices goes, the Quick Keys controller extends the functionality and efficiency of the tablet and is a very useful tool even on its own. Because of the way buttons and functions can be customized for a wide range of functions on virtually any application, this tool can be useful for photographers, digital illustrators, designers, architects and can (eventually ) even be used for video games.

What can be improved

You can buy the tablet here. 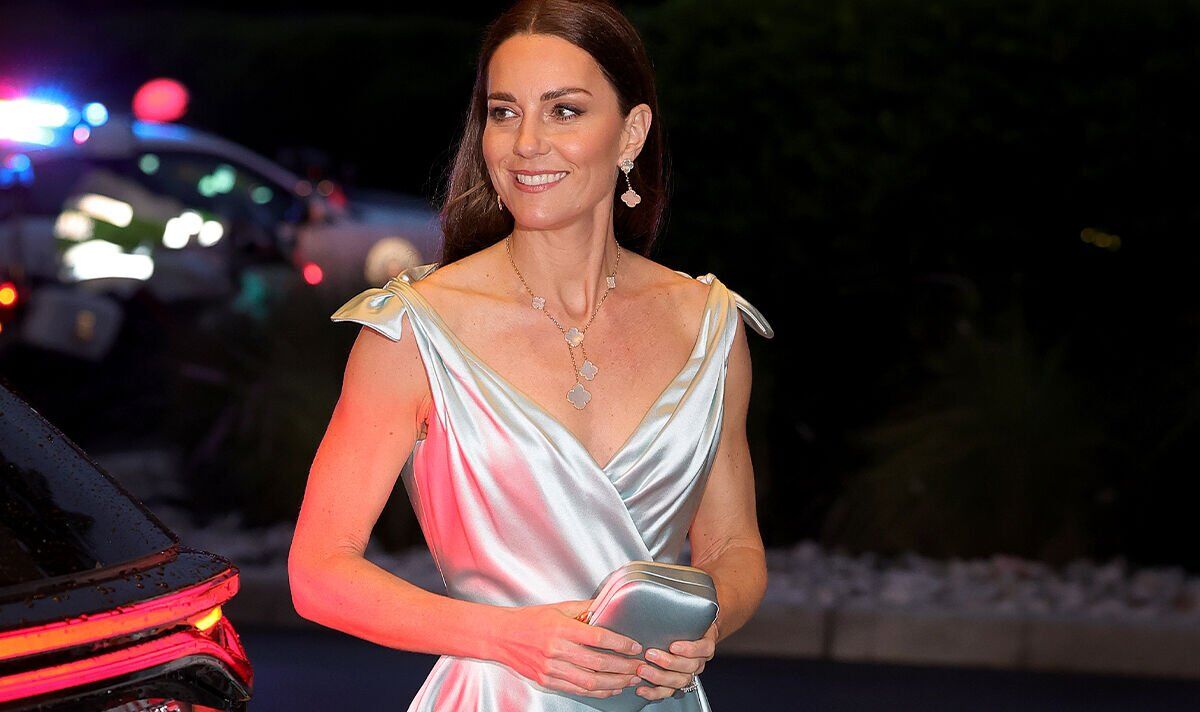 Kate Middleton has been inspired by Princess Diana in many ways over the years, but …