The Daily Herald – The words of the prefect “lit a tactile paper” for the demonstrations, according to the collectives

MARIGOT – Collective spokesperson Lenny Mussington at a press conference at Sandy Ground on Monday accused Prefect Serge Gouteyron of “criminalizing” the young people of Saint-Martin with remarks which, according to Mussington, exacerbated the protests and raises the voltage level.

The collective bargaining group summoned the press to explain the reasons for the escalating protests.

“First, we did not have the protocol meeting that we wanted for our counter-proposals on October 20 and the same week, the prefect decided to qualify the Saint-Martinois who were demonstrating as’ tyrants, drug traffickers, terrorists and descendants of slaves, ”he explained. “Young people heard this while following social media and were humiliated by these comments. Perhaps the prefect does not realize it, but he put a match in the powder.

“You cannot solve social problems with repressive force,” insisted Mussington. “We must build projects and carry them out, and integrate those who are suffering. There is a high school failure rate here. When you fail in school, you don’t have the tools to survive properly and become marginalized. Without qualifications, you cannot find a job to earn money and survive.

“When you don’t have a job, it leads to poverty and unhealthy environments that lead to crime. This is the vicious cycle that too many of our young people are in fact in. The prefect is well aware of the unemployment figures.

“You cannot solve this problem by bringing in more gendarmes,” he continued. “You have to involve the right specialist people and as many partners as possible, including us. Hold round tables and find ways and means to deal with these fundamental questions now. But it seems to me that the authorities do not understand this, so the problems will continue. “

Mussington did not believe that discussing the issues with territorial advisers, the MP and the senator was the right approach. Despite the misunderstandings with the prefect, he declared that the collectives still wanted to resume dialogue and negotiations with him.

“We have said that we are ready to resume when the situation calms down. “

Cédrick André declared that the prefect made his remarks by referring only to a minority. “But now look at the consequences of what he said.”

It was not clear if the collectives were in control of the situation in the French Quarter, but André said that what was happening there was not normal and that an effort will be made to intervene and calm the situation there. He also added that now was “not the time” to impose mandatory vaccinations and a health pass in addition to already urgent social problems.

Horace Whit added: “We hope, and we will examine the attitude of our local politicians and parliamentarians and warn them not to support any policies, and not to give the prefect permission to brutalize our people because they (them) politicians) should stand up for the people of Saint-Martin.

“Let’s see if they can get up and say no to the prefect. What he is doing is wrong. We know there is money for Saint-Martin, but people are not taking advantage of it. Young people are doing what they need to do to get justice, to get jobs, to be treated like people, to be treated as if they have opportunities. We warn our politicians, don’t sell your people. “

Other remarks came from Albert Blake of the UNI-T 978 union and Marceline Dessout of the General Confederation of Workers of Guadeloupe (CGTG).

Barricades were erected Monday at Oyster Pond in the Coralita area. A fire was also observed near the Look Out Point and the Whale Observatory. Residents of Oyster Pond were angry and said there were several attempts to block the public road. Garbage cans were set on fire in the housing estate and barricades were dismantled by residents.

“The racketeering was organized with complete impunity by masked and helmeted individuals at the Whale Observatory”, reports a resident. “If the border has remained open, we owe it to the intervention of the police on the Dutch side, but individuals on scooters from the French quarter are constantly monitoring and will block this passage as soon as the Dutch police have turned their backs. What a shame, what a humiliation. We did not see any gendarme.

The Rendezvous Tour company was forced to cancel a sightseeing bus excursion to Orient Beach on Tuesday due to the situation in the French Quarter.

A fire burns on Coralita Road near Oyster Pond on Monday afternoon. 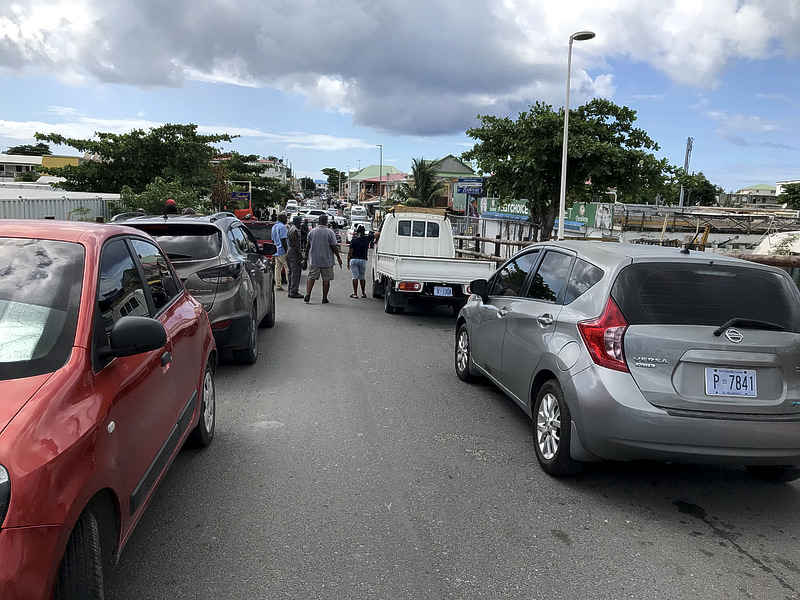