This is not news Frame.io pioneered camera-to-cloud (C2C) workflows. However, one of the notable integrations announced recently was the addition of C2C functionality for iPhone and Android users with the Filmic Pro camera app. The update has already appeared in your Filmic Pro settings if you have kept the app up to date. Frame’s C2C functionality requires Filmic’s Cinematographer Kit (an in-app purchase) and a Frame.io Pro or Adobe Creative Cloud account.

Professional filming with iPhones has become common in many market sectors for both primary and secondary videography. The Filmic Pro/C2C workflow can come in handy when speed and remote access become factors in your production.

Filmic Pro’s C2C integration is a bit different from Frame’s other camera-to-cloud workflows, which are tied to Teradek devices. In these situations, the live video feed from the camera is simultaneously encoded into a low-resolution proxy file by the Teradek device. High-resolution OCF (Original Camera Files) media are stored on the camera card and proxies on the Teradek. Proxies are uploaded to Frame. There is some latency in triggering the proxy generation, so the start and end times do not match perfectly between the OCF media and the proxies. Precise links between file versions are made possible by a common timecode. 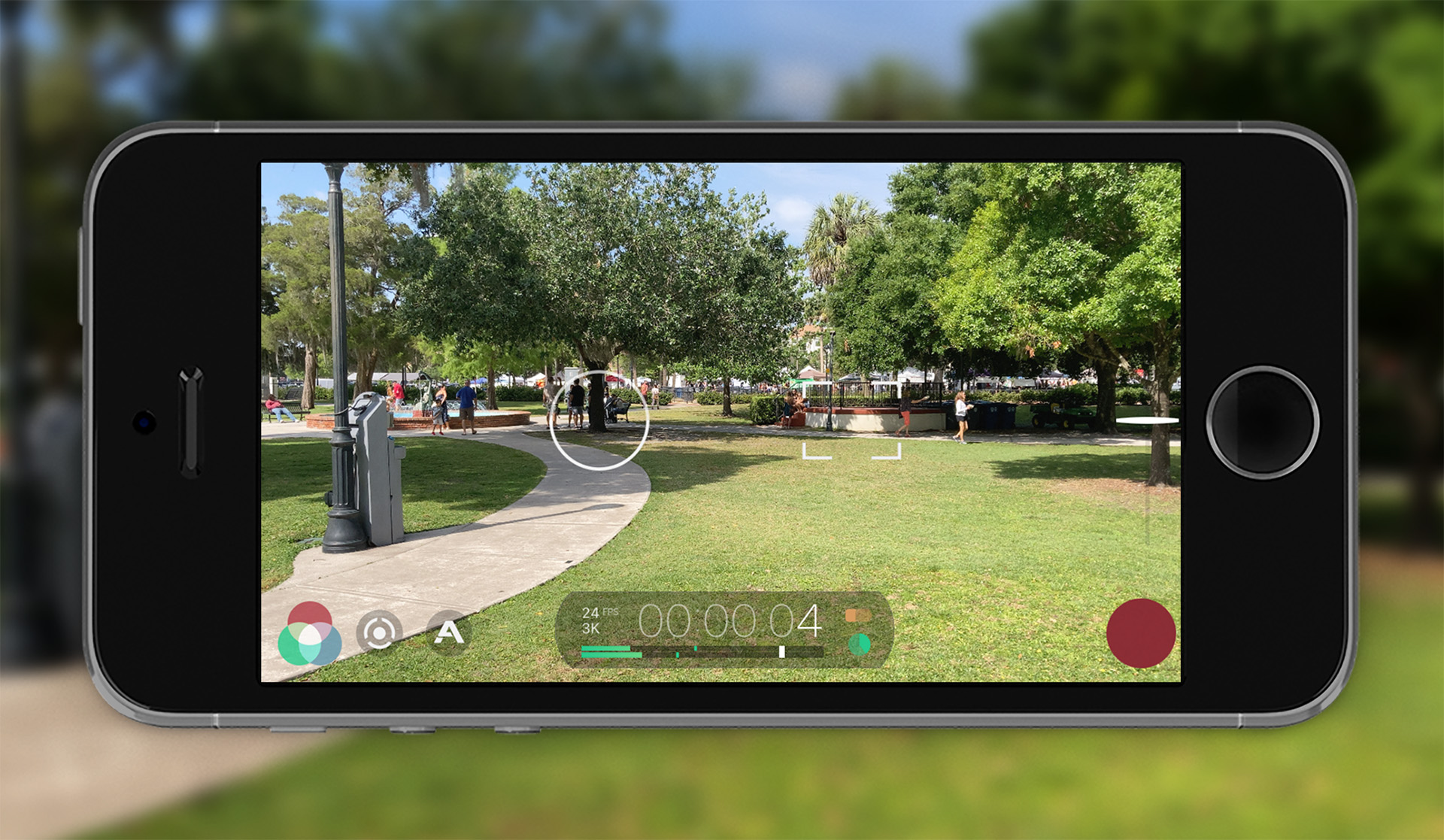 An Android phone or iPhone does not require any additional hardware to handle proxy creation or download. Filmic Pro encodes the proxy file after stopping recording, not simultaneously. High and low resolution files are stored on the phone in Filmic’s Clip Library and have identical durations and start/stop times. Filmic Pro will not add a timecode track in this mode, so all files start from scratch, but with unique filenames. If you’re shooting with multiple iPhones or dual-system audio, be sure to categorize the clips so the editor can sync the files.

I have an iPhone SE and the software, so it was time to run some workflow tests in a hypothetical scenario. Here’s the premise – three members of the production team (actually, me, of course), all located in different cities. The videographer is on site. The producer is in another city and he is going to do a quick tour for the content of the story. The editor is still in a third location and it will conform high resolution camera files, add effects, graphics, color correction and finish mixing to deliver the final product. Of course, I’m a workflow nerd, so the producer and editor will use different NLEs – well, just because they can.

Before you begin, create a project in Frame.io and enable C2C in project settings. If you don’t, the camera has no place to upload clips. In the settings panel of the Filmic Pro application, log in to the Frame account to access the C2C compatible project. You are now ready. 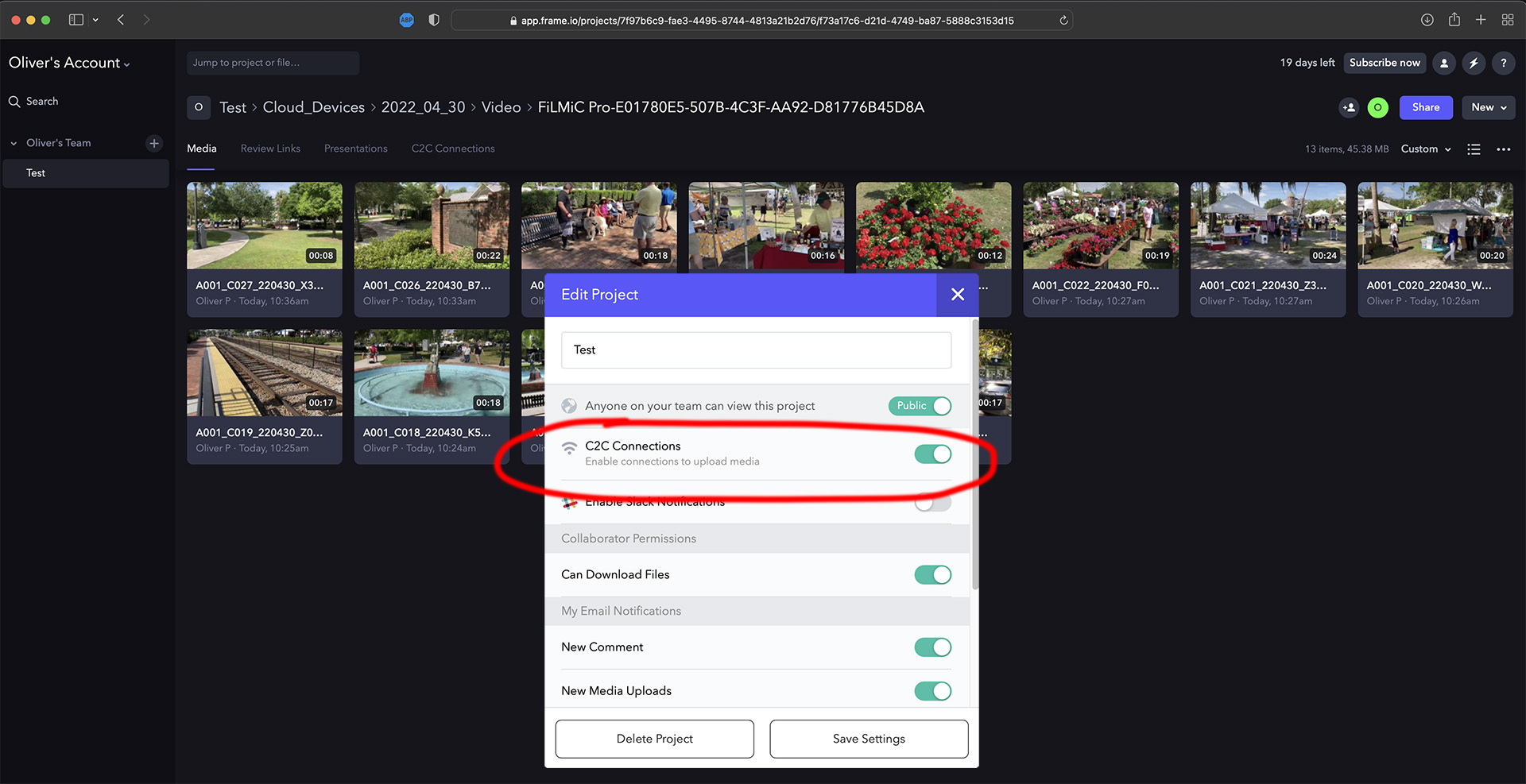 I filmed on a sunny Saturday morning at a local park. The recording format was 16×9 3K (3264 x 1836) at 24 fps using the Filmic Extreme codec. This records an HEVC original at around 76 Mbps. 3K clips give me more room for punch-ins when working in a 1920 x 1080 timeline. You can choose from three different proxy formats. I chose 720p, which encodes at a variable bitrate ranging from around 3-6 Mbps. They seem a bit crunchy, but good enough to modify. File sizes of original 3K clips are approximately 24 times larger than 720p proxies. 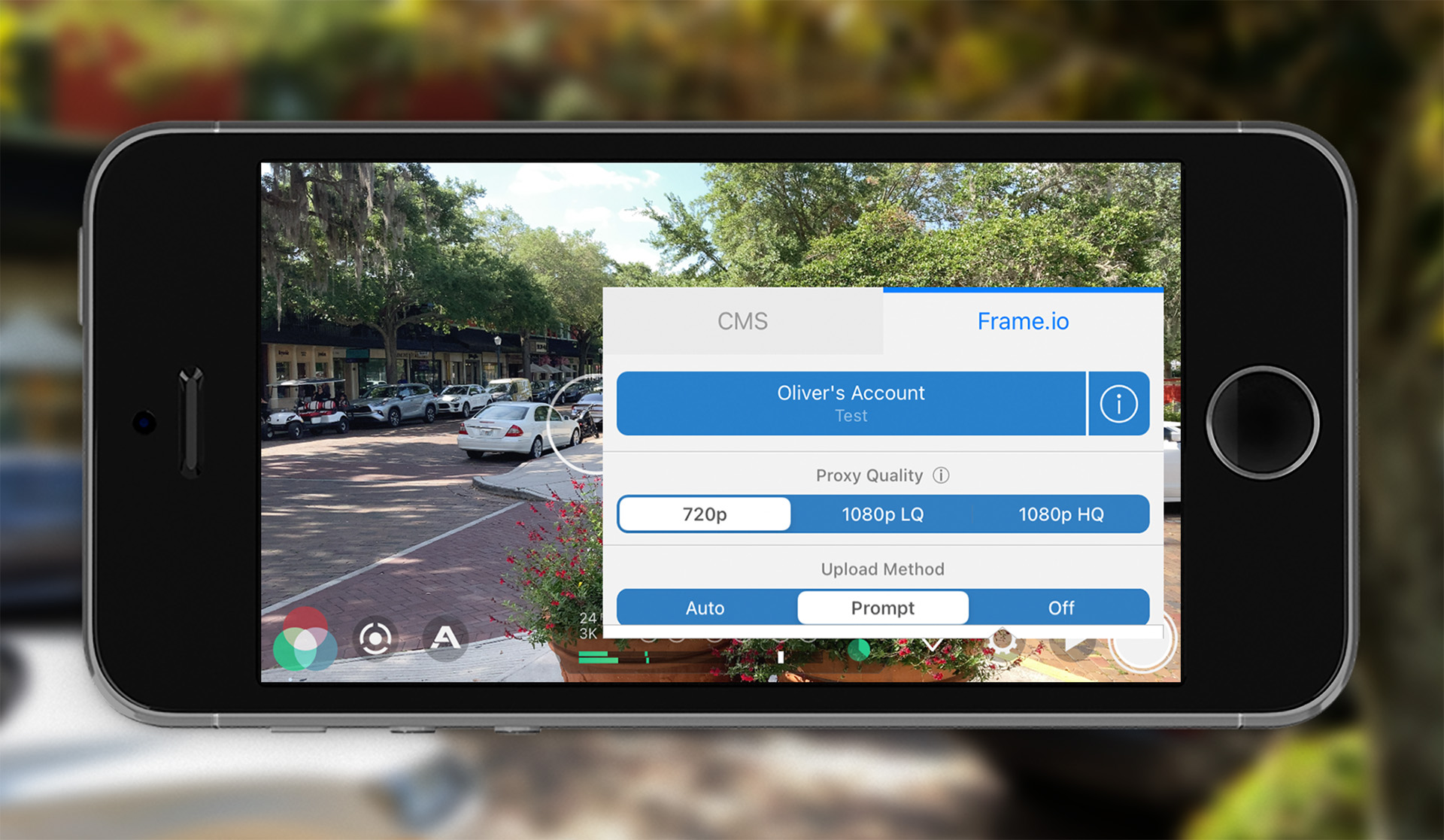 You have three download options: automatic for all clips, don’t download at all, or have Filmic Pro notify you after each recording is complete. I chose the last option. Every time I pressed stop, the iPhone took a few extra seconds to downsample a proxy file after I clicked “yes” on the prompt. It’s also a good option if you want to avoid bad catches. As part of the proxy setup, you can choose to wait for downloads until Wi-Fi is available or to always use your phone’s 4G or 5G data connection. If you expect wifi, metadata is sent for each clip to the Frame project, but no audio or video media. Once connected to the local wifi, the proxy media download can be completed.

In this scenario, the producer (me) is parked in a cafe to start editing offline working with the proxy files. Frame.io has partnered with regular NLEs to build integrations using extensions technology. This allows the editor to access Frame files directly from the editing application. In the case of Premiere Pro, download the proxy files from the panel to your trash. Final Cut Pro users can simply drag clips from the panel into an event. These steps download the proxy media to your local computer and you are good to go.

I chose Final Cut Pro for offline editing and dragged the 720p/24 files to an open event (bin). These were edited into a 1080p/24 (sequence) project. The steps are essentially the same in Premiere Pro, although I found the codec to be more difficult on Premiere. Either way, the FCP edit ran fine on my old MacBook Pro. 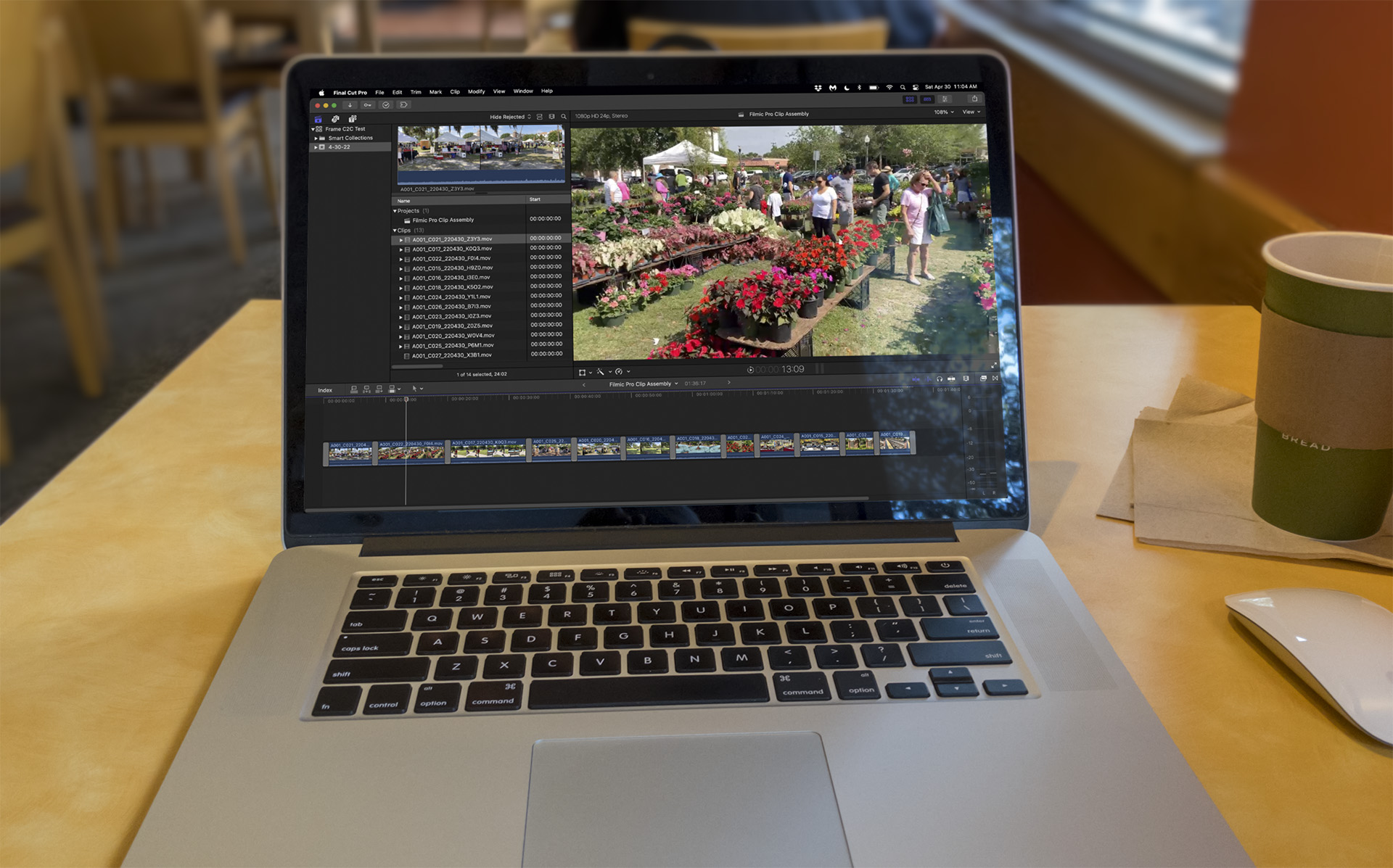 Two things to note. First, these downloaded proxy files will have different extensions depending on whether the files are downloaded in FCP (.mov) or Premiere (.mp4). Second, Filmic Pro records at full frame rates, so 24fps is a true 24.0, not 23.976. Your editing sequences must match in order to avoid later problems in online editing or when moving between applications. Once the creative cut was locked, I exported an FCPXML from Final Cut and emailed that file to the online editor (myself) for finishing.

Donning my online editor hat, I drove home on my iMac (hypothetically to another city). Continuing the workflow experiment, the “videographer” dropped the high-resolution originals from the iPhone onto his laptop and sent them to the “online editor” using a fast transfer service. , such as High Tail or MASV. I uploaded this OCF (Original Camera Format) media with FCPXML edit list from “producer”. Depending on preference, the online editor can use FCP, Premiere Pro, DaVinci Resolve, or something else. So I tested all three.

My first step was to download the same proxy media from Frame.io into the iMac to verify that the footage with the proxy media still matched the producer’s offline edit. For FCP, import the FCPXML and verify the sequence. For Premiere Pro, convert the FCPXML to XML using Intelligent Assistance’s XtoCC app and import it into Premiere. After verifying the cut, reconnect the mount to the videographer’s Hi-Res OCF. Here’s where a few pitfalls come into the picture.

When moving from FCP to Premiere with proxies, care must be taken when reconnecting media. FCP to FCP shouldn’t be a problem, but in Premiere you’ll need to uncheck the file extension filter in the reconnect dialog. Unfortunately, both apps retain the 720p metadata for spatial conformance (the scale/padding/fit settings) of the proxy media in the timeline. Even if the media file is really the original 3K file after reconnecting, the clip in the timeline will still render as 720p, but without any loss of resolution. You can solve this problem in Premiere by copying and pasting the clips from the sequence into a new sequence. The same trick doesn’t work for FCP and you either have to replace each clip on the timeline or round trip from FCPXML through Premiere Pro and vice versa. 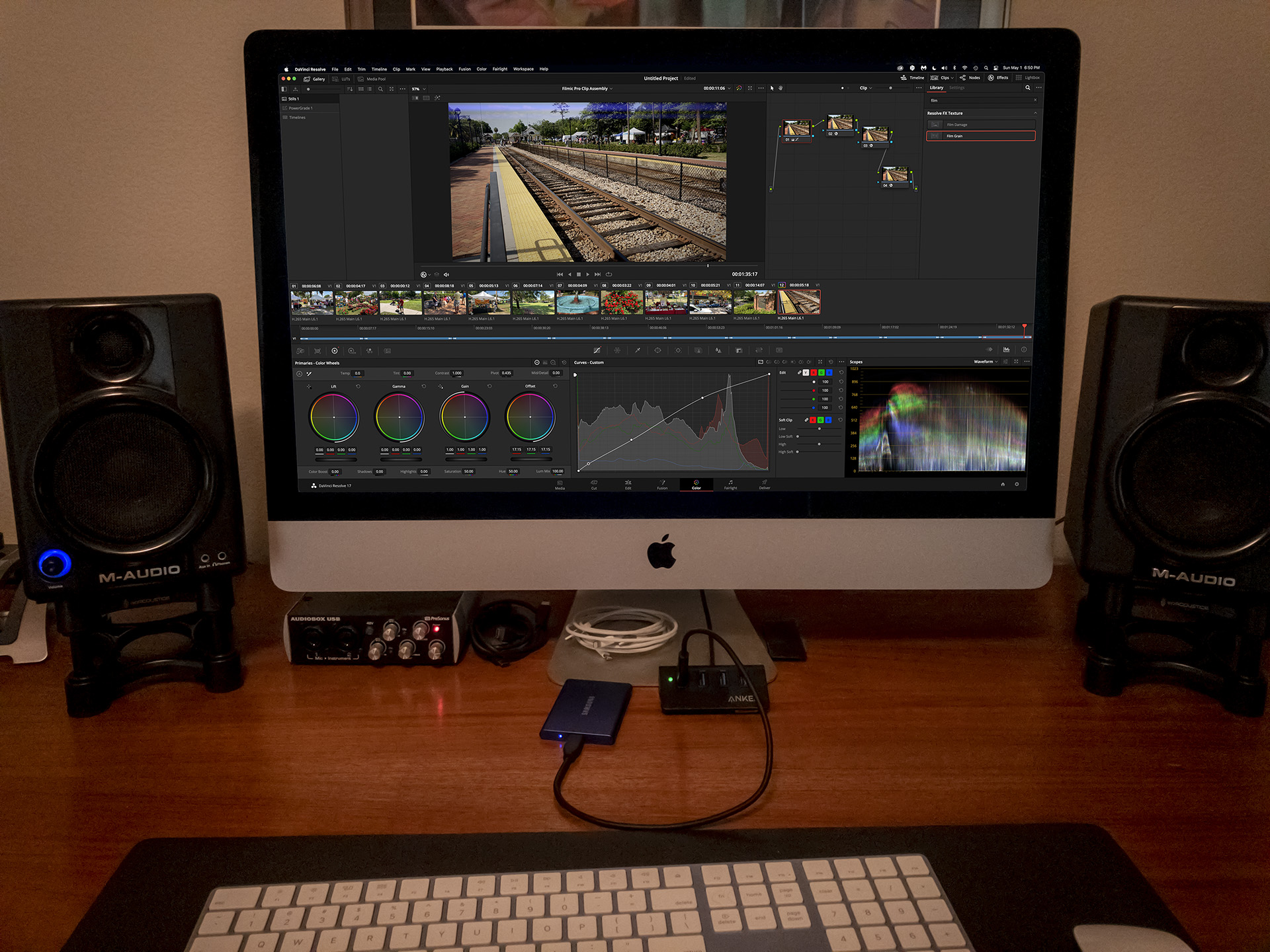 Resolve handled this better, especially if you just start with the original camera files. Set the project to 1920 x 1080 at 24 fps and import the OCF media into Resolve’s media storage. Next, import the FCPXML as a new timeline. Uncheck the functions that define timeline sizes and media based on FCPXML data. The timeline will be immediately linked to the 3K OCF from the media storage without any spatial conformance mismatch.

In an effort to test the workflows, I deliberately moved several apps around. Most users would probably stay in the same app for all changes. However, since reconnection is always involved in going from offline (proxy media) to online (OCF media), the steps and complexity vary for different NLEs. The obvious issues to consider are the file length differences when using the Frame/Teradeck workflow, as well as the spatial conformance differences I listed above.

Although this workflow is not suitable for all scenarios, it proves that integration between Framework.io and partners like Filmic Pro can create compelling workflows. It’s not just for YouTubers as some might imagine. Look at what is happening today in war zones like Ukraine. It’s quite evident that light cinematography coupled with remote publishing can deliver impactful stories even in tight deadlines. In a world where anyone with a smartphone can be a videographer and media instantly travels across continents, Frame.io and Filmic Pro have certainly introduced a unique workflow solution.