When a landmark spans three blocks and has been around for 162 years, it’s an institution. A force to be reckoned with since 1860, Broad Street Market holds the unique distinction of being one of the oldest continuously operating market houses in the United States.

“Start Spreading the News,” the iconic Midtown Market sign will be officially dedicated after it was recently remodeled and relocated. He will have his own 3rd at the block party in Burg this Friday evening. The city will close the area in front of the market for the celebration. Switch Fu will perform their multi-genre funk music live for partygoers. The sign will be lit at 6:30 p.m. and both market buildings will be open late for the festivities. The evening’s itinerary will include guest speakers, food trucks and music. Special Broad Street Market vendors will be selling produce at 3rd among Burg customers. Two Brothers BBQ’s Leon will be serving open-air barbecue and chili outside, while other brick vendors will be preparing side dishes to go with the “that.” Guest speakers will include Mayor Wanda Williams, Market Board Chairman John “Ski” Sygielski (HACC Chairman) and Matt Krupp of Lighten Up Harrisburg. “It could happen to you.” 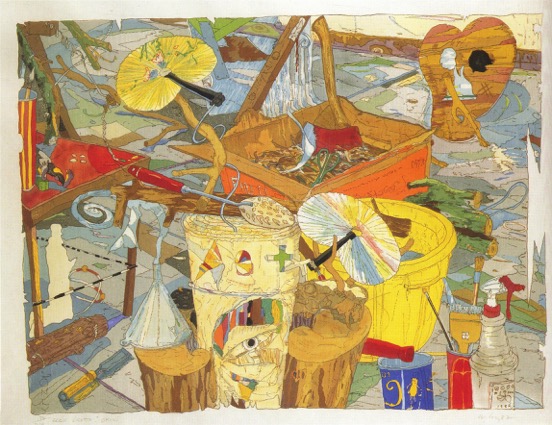 “Rock, paper, scissors, shoot.” The Susquehanna Art Museum has just opened its three-month summer blockbuster, “Making Your Mark: Prints and Drawings from The Hechinger Collection,” which brings together an impressive array of works on paper. The exhibition reveals the different materials and methods used in modern artistic practice. The exhibition, presented in the Lehr Gallery, runs until September 18. Don’t forget that paper beats rock, all summer at SAM.

Ten years to anything these days is cause for celebration. Mechanicsburg’s Metropolis Collective gallery is not only still around, but it continues to bring the best in alternative art and artists to the area. To their credit, owners Richard Reilly and Hannah Dobek took the art road less traveled and forged their own path. It’s ironic that the gallery is on Main Street, because its offerings are as far from mainstream art as the map allows. It proudly announces the opening of its tenth anniversary exhibition on Friday, July 1. Fireworks will have nothing on this show. “Habitat: Reflections on the Environment” innovates by exploring the fragile ecosystems that make up our overall living space and our individual dwellings. The world is our oyster and the home is a real state of mind, as evidenced by the creations of the gallery’s artists. Dobek, the gallerist and artistic driving force behind Metropolis, shared that the show is about “life on earth, life as mammals…and the elaborate structures erected to house humanity, from office buildings to shopping malls. shopping malls, slamming cars that take us there… the effects of war and homelessness and at the heart of it all, how we care for each other and the places we share in an ever living community connected but somehow detached to the world around us.

Local artists include Joanne Landis, Nina Rubin Mangione, Matthew Zeigler, Bonnie Lorwey and Ms. Dobek. East Coast environmental artists offer their unique perspectives on habitat and include Sean Matthews, Jamison Eckert, Jude Screnzi, Amy Asher and Hailey Patrick. These artists and many others will exhibit their work. The reception party runs from 7 p.m. to 11 p.m. with a suggested donation of $5 for one-man band, Nick DiSanto. The party is for all ages and perfect to kick off the holiday weekend. “Habitat” runs through September 15 during regular gallery hours on Fridays and Saturdays. The allure of the exhibit can become a habit, requiring repeat visits to the gallery to see it all.

If you like what we do, support our work. Become a friend of TheBurg!