This gallery wall of portrait photography was represented by Marti Steiner Jones and her daughter, Beth Jones, and cost between $50 and $100. Marti is co-owner of Antiques on Elm in Manchester, NH

Review and photos by ZG Burnett

ALLENTOWN, PENN. – For more than 50 years, the Allentown Paper Show has been one of the largest and most diverse pop-up fairs in the Northeast. From 1970 the exhibit started with general antiquities and evolved into a book, paper and ephemera exhibit with great success, so much so that a second exhibit was added to the calendar year. After 42 years on the show, founder Joyce Heilman retired in 2021 and brought local marketing professional and longtime Paper Show fan Sean Klutinoty to the post. On October 1, Klutinoty was at the front door of Allentown Fairgrounds’ “Ag” Hall, bright and early at 8 a.m. as many vendors set up more than 200 stalls. The venue, officially known as the Hall of Agriculture, is a combined industrial structure of two giant spaces that looked anything but empty when all the merchandise was on display at 9 a.m. when the doors opened.

“We had over 1,000 people come through the doors,” Klutinoty said. “A lot of people came for the two days.” The first day saw the Ag Hall quickly fill with customers, and the second day saw a lot more buying and selling despite a slightly smaller crowd. Dealers were always very happy with their sales and, according to Klutinoty, some said it was their best show.

Attendees were ushered into the first building and greeted by two rows containing 34 stalls. An eye-catching oversized poster hung high on the wall drew attention. Presented by The Rock Top Book Shop and Bindery of Cashtown, Penn., the poster was possibly a unique example of an advertisement for Georg Jacoby’s big alarm (1938), released in France under the title Manhunt and translated into English by Man Hunt. Not to be confused with Fritz Lang’s 1941 thriller, this film follows an unlucky delivery man who mistakes someone else’s notebook for his own and becomes the target of a local gang of auto thieves. Representing Rock Top was Mike Shoemaker of Shoemaker Booksellers (Gettysburg, Penn.), who explained that the poster had suffered extensive water damage when it was found. It had been cleaned, restored and re-lined to great effect, and was priced at $5,000.

Further down the aisle was an impressive photo wall of framed 19th century photographs of people whose names may be forgotten but who were likely to find new families with collectors this weekend. These were featured by Antiques on Elm in Manchester, NH, a group boutique co-owned by Marti Steiner Jones, Monica Riley and Lita Hogan. Jones has been selling and collecting antiques for 47 years and represented the store with her daughter Beth. After competing last April and October, they decided another fall show was well worth the 12-hour round trip. Photographs cost between $50 and $100, and as customers punched holes in their display, the vacant spaces were filled with more frames. 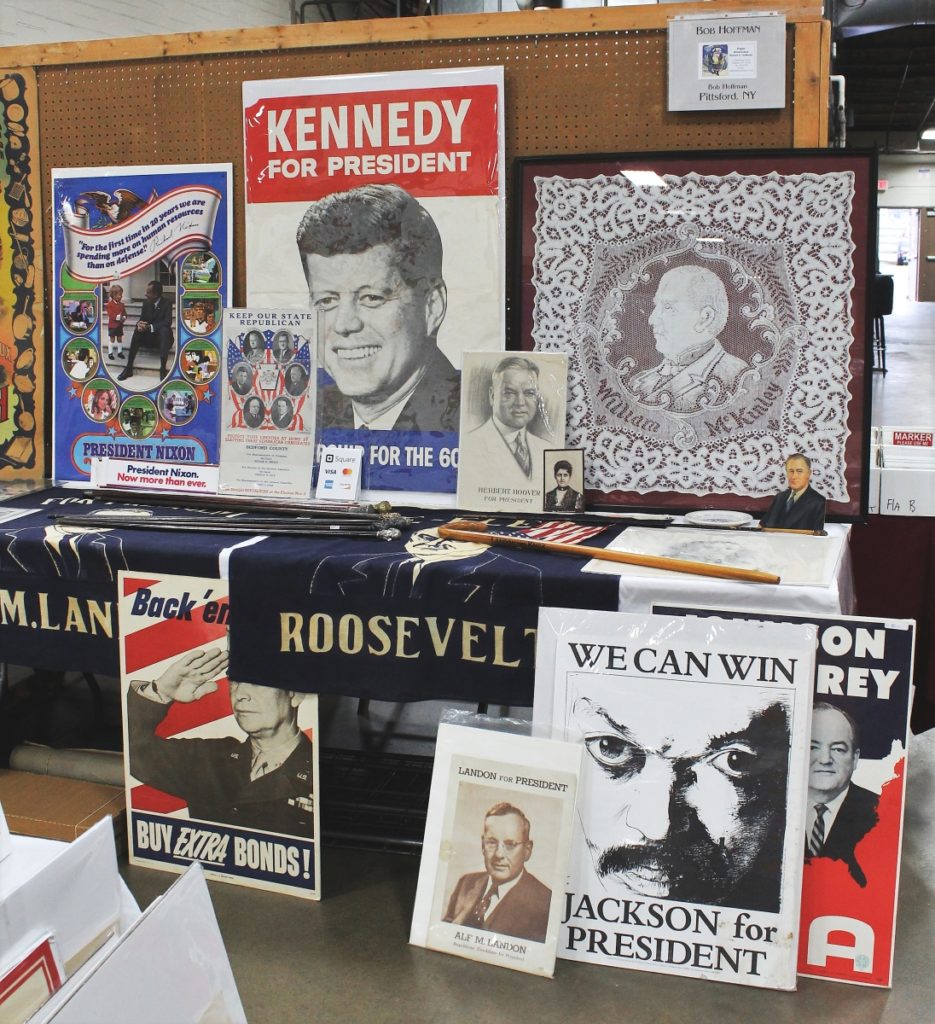 Presidential memorabilia collectors were well served in Allentown; this collection of campaign posters and other materials was courtesy of Bob Hoffman of Paper Americana, Pittsford, NY

Somewhere In Time, Cincinnati, Ohio, displayed another gallery wall but instead of photographs it was filled with shelves of well-preserved boxes for men’s and women’s clothing, mostly hosiery. “These are real ephemera,” said Bette Jones, who has been selling for 20 years. “These are the kinds of things that would have been thrown away, but somehow survived.” The boxes dated from the turn of the 20th century through the 1950s and cost between $20 and $70.

Scott and Cynthia Bullock of Black Cat Antiques, Bethlehem, Penn., specialize in antique and vintage holiday items, and their booth focused on Halloween and Christmas ephemera for the fall show. Planning ahead, the majority of their booth was devoted to Christmas and decorated with ornaments, vintage greeting cards and cutouts. Most of these sparkly items were German, and Cynthia shared that they specifically transitioned to general antiques holiday items “years ago.” Halloween was becoming especially hard to come by, she said. Cutouts were priced based on size and age, from around $50 to a few hundred.

Karen Frost and Kristina Gangitino shared a stall in the even larger second building of the Ag Hall with over 100 vendors, who displayed a huge range of old and vintage photographs, antique children’s clothing and small accessories. Frost was selling her collection after the recent closure of her business, Isabelle’s Bridal & Eveningwear in Somerville, NJ. Many photographs were arranged around her stand like an old scrapbook, and past customers may recognize the ones she used for promotional materials and shop decorations. . “It combined my two loves: antiques and bridal [clothing]“explained Frost. Comments from Isabelle’s clients praise Frost’s service and expertise, which was evident in the generosity with which she spent her time at the salon.

Gangitino has always been a fan of jewelry and hasn’t inherited much from her family, so after altering a ring from her grandmother into a piece she liked to wear, she started making jewelry and accessories with the Feathers in Bloom brand. After meeting Frost, Gangitino began incorporating photography into his work. “People don’t wear photos like they used to anymore, and I love putting old things back together,” she said. Gangitino was happy to make new contacts at the show and also received a few jewelry orders. Keep an eye on her Etsy account, which is currently in the works. 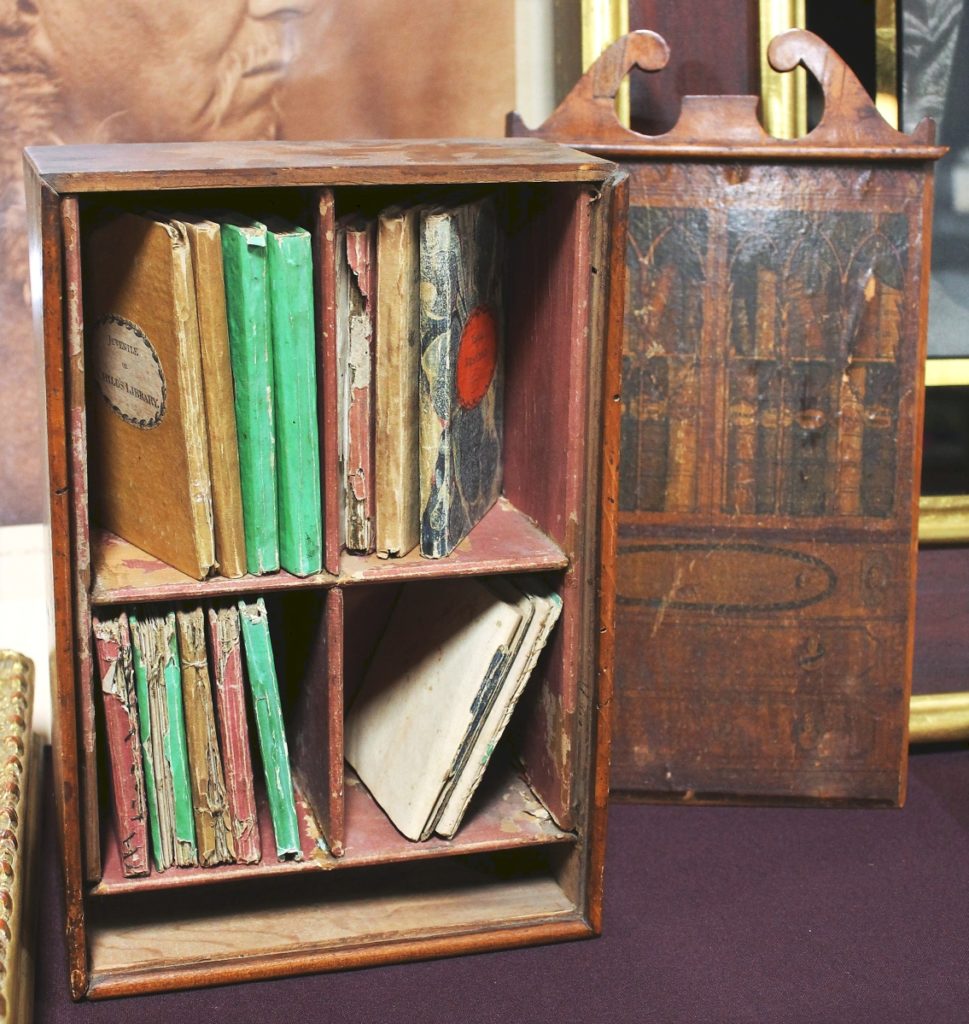 This miniature “juvenile library” was produced by John Marshall in the early nineteenth century and donated by Ken Leininger, Denver, Penn., who had never seen an example like this; it was offered for $2,500.

The nature of ephemera sometimes makes it difficult to find a source for items; those who have only lived in the digital age may find it difficult to conceptualize the amount of paper products that recorded everything before the advent of hard drives, and much information has been lost as collections were consolidated or abolished. Sometimes searching for these answers can lead to a sale, as well as aesthetic appreciation. Such was the case with a signed painting by Bob Nance of Hazelton, Penn., who was selling a lovely jewel-toned painting of a cowboy burning his own “Wanted” poster, showing his reflection in a mirror shattered by a bullet. . The painting was signed, but Nance found nothing about the artist. The painting was bought and sold by another dealer in the space of our conversation for $250.

Often, sellers will sell bulk lots of photos or entire albums, appealing to a buyer’s interest in an established collection or archive, and the ability to resell the items therein piece by piece. Jason Denlinger of Denver, Penn., has gone hundreds of extra miles in this regard, offering the entire studio archive of photographer Henry M. Beach (American, 1863-1943). Best known for his photographs of the Adirondacks, Beach was a self-taught and prolific photographer who documented the rapid industrialization of the United States, often illustrating the contrast between the country’s natural beauty and the encroachment of civilization on its landscape. From Denlinger’s description of the archive, “This archive consists of numerous cameras, lenses and photographic equipment that Beach used throughout his 60-year career as a photographer.” These included, but were not limited to, over 1,000 glass negatives, over 120 actual photographic postcards, 70 panoramas, and six large format photos from Beach’s early career. Truly a once-in-a-lifetime opportunity, Denlinger was selling the Beach Archive for $60,000.

Many vendors focused on a single type of paper or theme, and chief among them was Lisa Breish Antiques of Port Washington, Penn., whose black and orange booth was a bag of vintage Halloween goodies. There were costumes, decorations, games, paper serving items and really everything imaginable to rival Lucy’s Halloween party featured in It’s the Great Pumpkin, Charlie Brown (1966). Breish collects and sells other antique holiday items through Anderson-Breish Antiques and The Kringle Shop on Etsy, but for Allentown, she’s pulled out all the stops for the upcoming festivities. For stockists wondering where all the Halloween merchandise is going when it sells out so quickly, there was no doubting Breish’s temptingly priced stock, “I collect Halloween 365 days a year!” 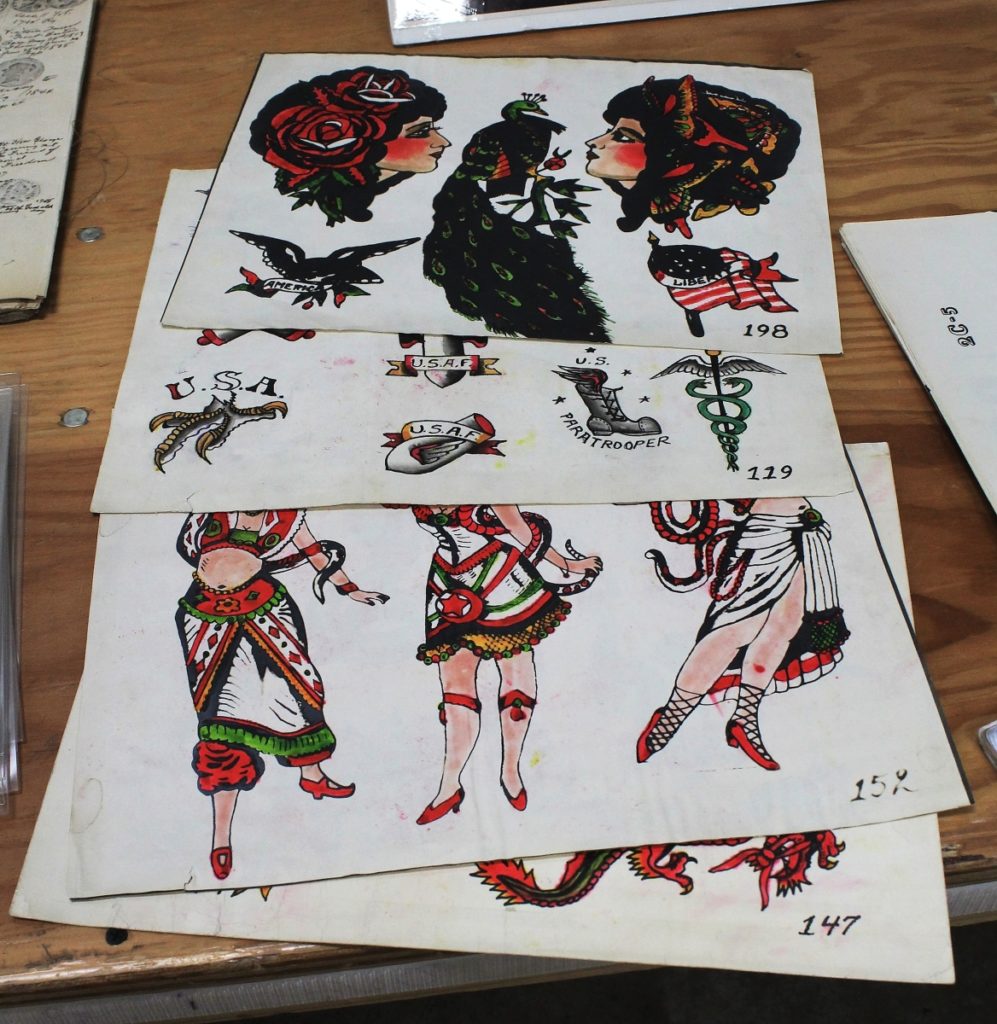 One of Allentown’s rarest treasures was in Ken Leininger’s Stand, a “Juvenile Library” made by John Marshall (American, c.1783-1828). Housed in an attractive Federal-style zipper box, the number of miniature books that remained in the collection was unprecedented in Leininger’s experience. Marshall began printing these small children’s bookcases in the 1800s, “galvanizing the market for children’s books.” These originally included 16 books and picture card sets. Leininger offered a printed history from the library, which he offered for $2,500.

You never know who you’ll meet at a show, and Allentown was no exception. What started as a conversation about a framed antique paper cutout, also known as a Scherenschnitte, has become a journey through family history. Bruce Updegrove bought the cutout in the 1970s at a Kutztown fair while helping his father sell his woodcarvings. The father was Frank Updegrove, a popular artist known for his highly detailed sculptures of life in the early 20th century. Frank was a carpenter by trade and joined the Ringling Bros. Barnum & Bailey Circus in 1924, when he began carving naturalistic scenes of circus life and animals. Many of these were housed in a nearby museum in Williamsport, Penn., and were unfortunately destroyed by fire in 1955. Few examples of his work remain, and some were listed in the 1990 book. Just for Nice: The Carving and Hewing Magic of Southeastern Pennsylvania. Bruce was proud of his father’s work and had a few framed photographs of a circus wagon and train at his stand.